Adams Township is the only Madison County township named for a Hoosier pioneer.  Abraham Adams, 1770-1848, brought his family in 1823 to the area of what would later become Ovid (New Columbus).  In fact, he is responsible for this little town.  He subdivided his property in 1834, laid out the design, and named it New Columbus.  He built the first log cabin there and, shortly afterward, a fine home which stood on a hill near Fall Creek overlooking the village.  As the area became more populated, the Adams' home was the site of the first elections in the township and the meeting place for Sunday worship.  Abraham Adams is buried in the Gilmore Cemetery.

Along with the Gilmore and Adams families, John Markle, 1793-1865, was among the first settlers in 1823 to Adams Township.  He laid out in 1854 the village that would become the township center and gave it his family name--Markleville.  At the main intersection, he built the first cabin  (see picture below) and lived there until his death.  Mr. Markle was Markleville's first postmaster and a member of one of the first juries formed in the county.  A friend and neighbor to author Samuel Harden, John Markle is remembered by that historian: "Strongly devoted to his friends, he hated his enemies as few men could hate."  John Markle is buried in the McAllister Cemetery, which is northwest of Markleville.

While the McAllister Cemetery does hold almost thirty Markle family members, there is within the family history a st 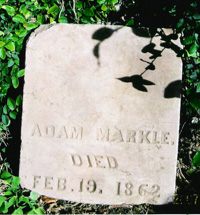 ory of a Markle family graveyard on what was once the D.C. Markle property.  On the 1876 plat map below, D.C. owned eighty acres in the northwest quarter of section 21.  According to family genealogists, the Markle plot was in the middle of the east boundary line, or near the "0" in the "80" marking D.C. Markle's acreage.  While there is no record of this family graveyard, MCCC members have little doubt that one did probably exist since many small family burial sites went unrecorded and were eventually forgotten.  The stone in the picture at right rather proves the story.  It was discovered in the 1960s in that general location and given to a descendant. Adding to Harden's account, Adam and Jacob Markle were brothers of John.  They also moved into the township and lived across from John on two other corners of Markleville's intersection.  Adam's wife was Mary Adams, and she died after her husband.  She, like her brother-in-law John, is buried in the McAllister.  She has a large column with her data on one side and Adam's data on the other.  The family, however, believes that Adam--as well as an unknown quantity of other Markles--was interred at the family plot on D.C. Markle's property and that Adam is simply memorialized on Mary's stone at the McAllister.

Eleven pioneer cemeteries are listed in modern records: Capp-Tucker, Collier, Evans, Kisling/Fleming/Old Keesling, Gilmore, McCallister/Walker, Ovid/Lutheran/Mt. Zion, Pee-Wee/Prince of Peace, Pendleton, Starr/Fesler (destroyed), and Williams (destroyed).  Some of these are shown below on the Adams Township plat map from 1876. 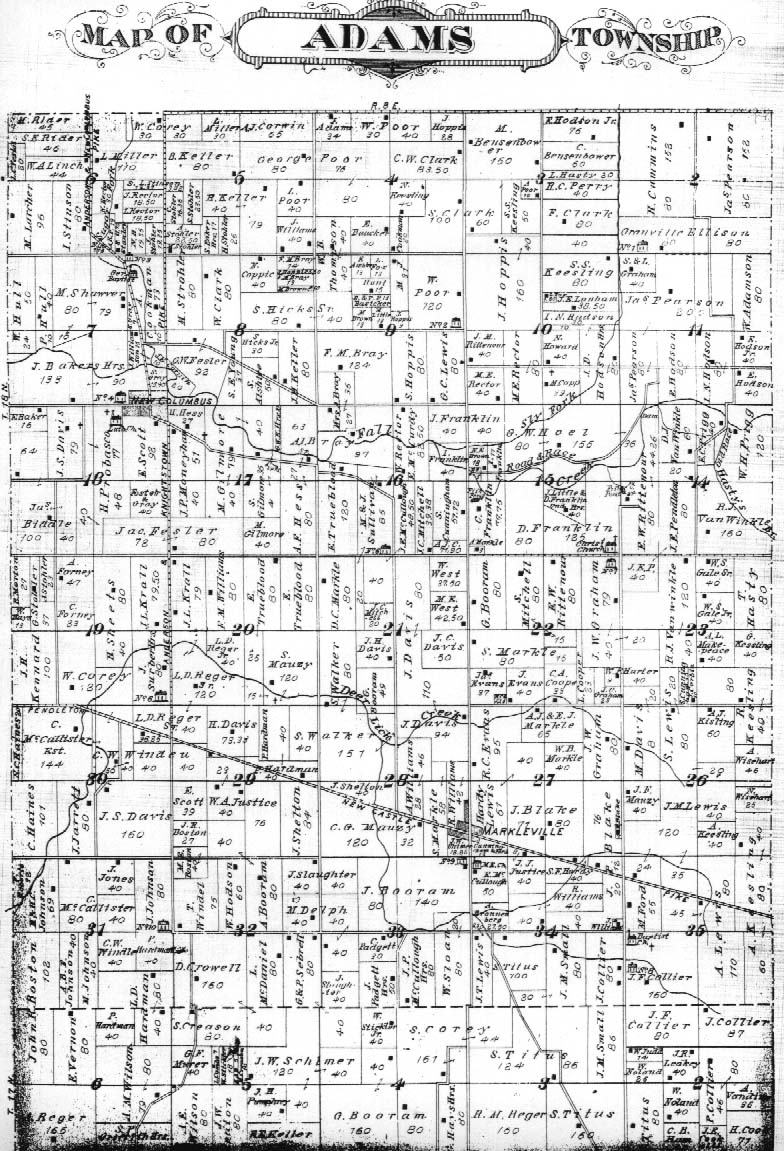