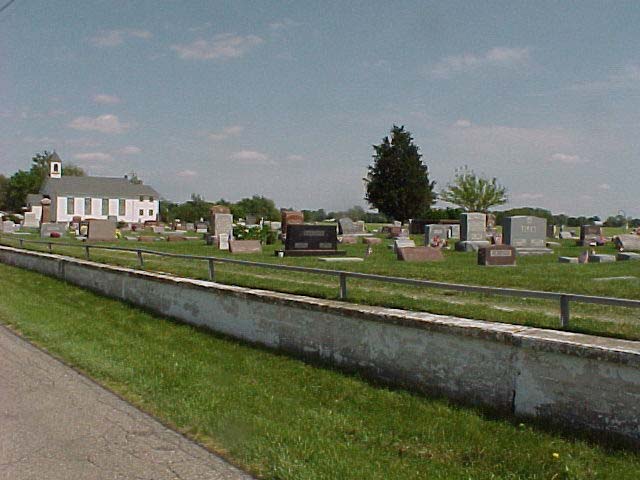 The Mount Zion Lutherans in and around Ovid/New Columbus, Adams Township, organized a congregation as early as 1848.  They met in one another's homes or in Ovid's log school house and were visited occasionally by traveling ministers of their faith.   William Saunders, John Baker, John Mowery and wife, and J.B. Cromer and wife were among the church's earliest members.  In 1861, the founders donated money to purchase an acre of land to the west of the village, build a house of worship, and start the customary adjoining cemetery for the church's faithful and area residents.

Below are stones representing some of the first families to Ovid/New Columbus.  Left, the north side of the Mays stone lists Henry, 1804-1888, and Jacob 1840-1904.  Left center, Harry L. "son of H. [probably Hiram] & M. Peden died Aug. 14. 1863 aged 3YS 3M & 4D." Right center Rebecca Brown was seventy-one years old when she died March 16, 1866.  That would make her birth date around 1794.  Right, the Stohler stone from the mid 19th century represents this Hoosier family that would, down through the generations, eventually have thirty-seven other members  buried at this cemetery.

The Mount Zion Lutheran Church remained operational for over 140 yea 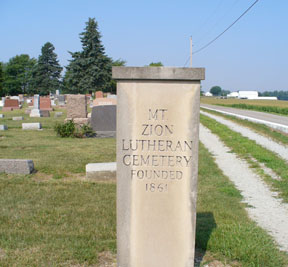 rs, finally closing its doors October 28, 2001.  The church's cemetery, however, continues to serve the community under the control of trustees, themselves descendants of the founders and later settlers and residents.  The Mt. Zion/Lutheran/Ovid Cemetery has become the largest burial ground in Adams Township extending beyond the founders' original acre to contain almost three.  There are now over 1000 people buried along its aisles. 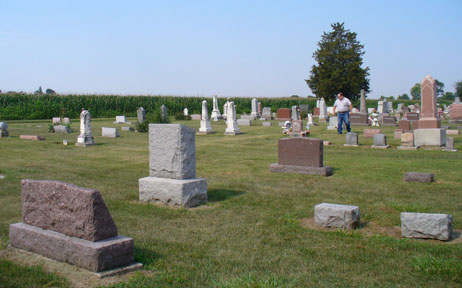 Above is a view of the Mt Zion Lutheran/Ovid Cemetery looking west from the church.  Newer stones can be seen interspersed with the old stones.  That is Thomas Hull scanning for pioneer grave markers.

William Saunders, one of the church founders listed above, was of German heritage and was 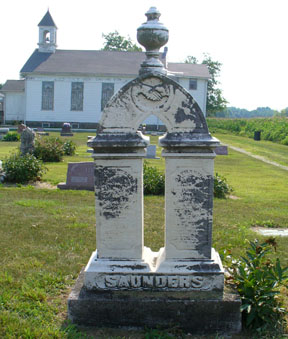 born in 1805 in Pennsylvania.  His wife Catharine Fesler was born 1797 also in Pennsylvania.  She was a sister to Peter, Jacob, and David Fesler, who would later move to southern Madison County.  William  and Catharine were married in Pennsylvania in 1832 and came to Madison County in 1840.  "Mr. S. was a splendid farmer, and honest man and a sturdy, old-time Democrat, " states county historian Samuel Harden.  William and Catharine's children were John, Jacob, Elizabeth, and George.  George would eventually marry Lucinda Judd, from another first family of the township.  Their children were John, William, George, Jacob, and Hiram.  William and Catharine lived in the Ovid area for the rest of their lives, and interestingly, both died in 1875: she in July and he in  August.  They rest with other early church members and area settlers at the Mt. Zion Cemetery.

William Cox, born in Ohio, October 1821, came to the New Columbus/Ovid area in the 1840s and married in 1845 Martha Preston, born 1826 also in Ohio.  The couple eventually purchased the Samuel Jackson farm in nearby Fall Creek Township.  Their children were Abijah, Tunis, William P., Martha F., Jasper N., Robert, Wesley T., and Isaac W.  The latter died in 1876, and his stone is in the center above.  County historian Samuel Harden was "glad to notice this family, one of the highest respectability and worth" in his book The Pioneer.  The father William died in 1909, and his marker is surmounted by an "angel or woman in mourning"--as the Victorians would say-- shown above left and right.  The pretty statue, which is positioned close to the road, CR 600E, has become something of a landmark.