aka Prince of Peace 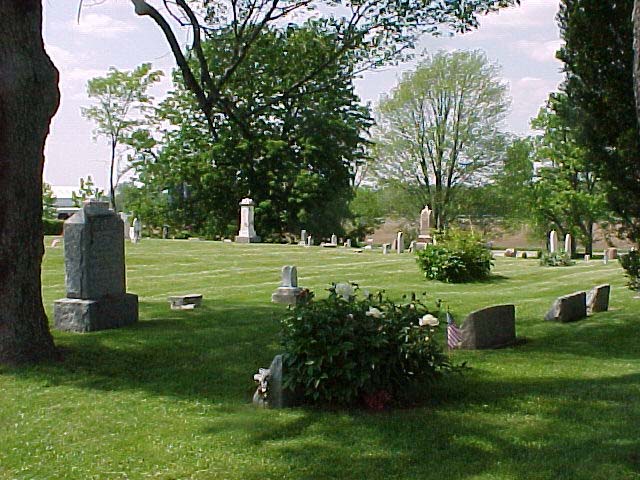 Pee Wee Cemetery west of Ovid--this view is from the newer section looking north over the hill and onto a valley along Fall Creek.

Like so many other pioneer cemeteries, the Pee-Wee is connected to a church.  In 1830, the "Pewee" Baptist Church was formed, and in 1834 a building half a mile west of New Columbus (Ovid) was constructed.  On the same hill as the church, overlooking CR 600S and a valley along Fall Creek beyond, the cemetery was consecrated for the remains of the faithful.  From the transcription of the gravestones, the Davis family had two members who were among the first to utilize the cemetery's services, a thirty year old adult who died July 2, 1835, and Reuben Davis who died July 27, 1842.

Another settler to Adams Township, buried here is Mathias Maddron/Madren.  Mathias and his family came as early as 1833 from Pasquotank County, North Carolina.  He was born there September 22, 1806, and in 1829 married Lurena Clark, born January 5, 1809.  Four years after the marriage and with members of their southern community, "...they came west with little of this world's goods when they arrived, but by industry and frugality obtained quite an estate and lived to enjoy the fruits of their early labor," as historian Harden puts it.  Mrs. Maddron/Madren died in 1863 and Mathias in 1887.  "Mr. Maddron was a strong man and helped much to make this county what it is today.  He as well as his wife endured hardships the people of today (1895) know but little about...  Mr. M. was an honest man, a hard worker... an old-time Democrat and will long be remembered as one of the Pioneers of Madison county [of the] 'Carolina' Settlelment." summarized Harden.  Mathias and Lurena had the following children: Lurana, Rebecca, Miles, Sarah, Mary, Emily, Nancy, William R., John A., and Joseph.

An indispensable craftsman to any pioneer community is buried here.  Peter Fesler/Festler was a blacksmith as well as being a farmer.  Blacksmithing was one of the most important positions among the early settlers because blacksmiths--workers in iron and metals--kept horses shod, wagons and tools functioning, and household appointments and farm equipment serviceable.  Peter was born in Pennsylvania in 1805 and migrated to Adams Township in 1840 along with other members of his adult family.  He purchased a farm north of Ovid/New Columbus, added several hundred acres along the north bank of Fall Creek, and eventually became financially successful enough to afford to build a brick home, a show place for its time.  Mr. Fesler was also politically involved.  He was a democrat and elected county commissioner in 1862 during the Civil War and was a stockholder in the Anderson-New Columbus Turnpike.  Unlike his sister Catharine Fesler who married William Saunders and became a member of the Mt. Zion Lutheran Church in Ovid, Peter was a devoted German Baptist or Dunkard.  Church services were often held in his barn before the congregation could afford to build a separate house of worship.  Mr. Fesler gave generously of his time and means toward construction of the first large German Baptist church near his home; however, he did not live to see it completed.  He died November 13, 1872, and is buried with other members of the Fesler family here at the neighboring Pewee Baptist cemetery.

While the Pewee Baptist Church congregation grew in the first half of the 19th century, in the latter 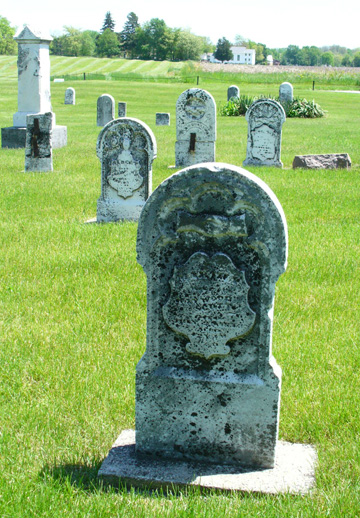 half, members numbered less than a dozen, and they held services just once a month.  In spite of the church's eventual demise, the cemetery continued to be utilized by area residents, and a new section was added to the south for future "members."

The Pee-Wee Cemetery is one of the pioneer burial grounds whose gravestone inscriptions were recorded by early 20th century Madison County historian Glen Walker.  When he passed his transcriptions onto Madison County Historical Society member W. Lloyd Scott in 1967,  Mr. Walker wrote, "My original record of the burials in the Pee-Wee Cemetery was made in 1932, revised in 1942 and again in June of 1952.  It is believed to be reasonably accurate as far as it goes, but there are still a few of the old markers I have never been able to decipher."  The MCCC and 21st century genealogists remain indebted to Glen Walker for his devotion and tireless efforts.