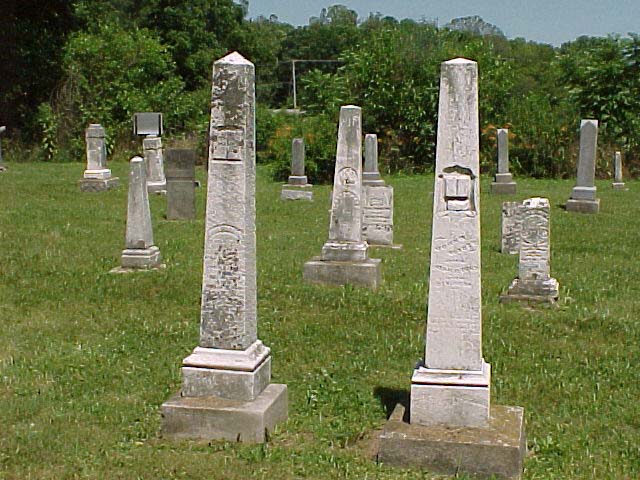 The McAllisters/McCallisters family, who gave their name to this cemetery, came from Virginia and initially settled on the south bank of Lick Creek in the spring of 1829. They were some of the first pioneers to homestead the untouched timber of Adams Township.  Other family members followed, and together they helped civilize the broader community of Madison County.  Foremost among the clan was Thomas McCallister, 1794-1852.  He was elected in 1842 as a representative to the Indiana State Legislature; he served for eleven years.  He was then voted to the state senate but died before he could take office.  Others of the family held positions as sheriff, judge, justice of the peace, and county commissioner.  It is also noteworthy that the McAllisters were numerous and included many single females who arrived in this area, married, established homes, and nurtured generations of descendants.  (As an example, see Susan McAllister Brown, on the Hardy-Culp page.)

William McAllister, brother of Thomas, is of special note since he had a commission in the War of 1812.  He was born in 1788/92 in Kentucky, but the family moved to Virginia where he grew up and eventually married Belana Frazier, 1796-1841.  In that state, he held offices in the county government.  He and his branch of the family moved to Madison County in the fall of 1835 and bought property close to other McAllister members in Adams Township.  He lived on the same farm for twenty-nine years and died in February 1864.

Thomas, William, their brother Garrett, 1831-1864, and thirteen additional family members are recorded on the burial list below.

The McAllister Cemetery holds several other pioneer families important to the development of southern Madison County.  The Markle family section is on the east side in the cemetery and just north of the gate as one enters.   John Markle, right, who was born in 1793 in New York, came to the area in 1823 and laid out the village of Markleville in 1854.  According to county historian Samuel Harden who knew him personally, John was "strictly honest; his word was as good as his note; ... a man of strong mind and will, though he had little education.  He was a great reader, and had the Constitution of the United States by heart [!!]."  John Markle died in 1865. (For more on Markle and Markleville, go to Adams Township page.)  John's wife Sarah/Sallie Allen was born in North Carolina in 1797.  She died in 1862 in Markleville and is also buried at this location.

At left, the metal grave marker, is for Samuel Markle who died in 1880; the smaller stones extending to the right in the picture are for his children who died when young.  Markles from mid 20th century are seen in the background of this view of the Markle section.

Among the other early Adams Township settlers buried at the McAllister is John Davis, 1800-1886, whom Samuel Harden, in his book The Pioneer, refers to as "one of the grand old men, whose memory we all revere."  John and Mary's daughter Clarinda died in 1875.

The second generation of the Mauzy Madison County family is buried here. Silas Mauzy, who was of French descent, is listed as one of the first settlers to Adams Township.  Silas's son Cornelius and his first wife Sarah Ann Garrison and their family rest at this burial ground.

Other homesteading settlers, members of the Blake, Cook, Evans, Hardy, Lewis, Sebrell, Somerville, and Williams families, are also represented at the McAllister.

One of the earliest burials at the McAllister had to have been Meshach Collier.  Meshach was born in 1778 and died in 1833, according to his stone which is pictured below left.  Meshach and wife Rebecca, below right, were the parents of Rev. J.F. Collier who began the Union Baptist Church and accompanying cemetery southeast of this location. (See the Collier Cemetery page for more on the church, family, and cemetery.)

Early 20th century Madison County historian Glen Walker was the first to make gravestone transcriptions of several of the pioneer cemeteries in the southern townships.  The McAllister was one of those he recorded, an arduous task considering the number of stones and the conditions of some of the graveyards at that time. Mr. Walker compiled the original list of gravestone data for the McAllister Cemetery in 1932 and revised it in 1962.   Mr. Walker turned over his records to the newly formed Cemetery Committee of the Madison County Historical Society in 1967.  Glen Walker's efforts remain invaluable.

The McAllister pioneer cemetery was still in use into mid 20th century. 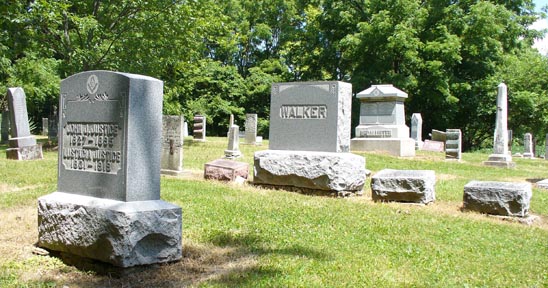