The Sigler Cemetery appears as the perfect setting for the classic American play Our Town.  Act III takes place in a cemetery where the dead calmly talk about the beauty of nature around them, life, and their future. The oldest stones at the Sigler, from the 1840s and '50s, are on the  tree-covered hilltop with the newer stones from the turn of the century on the slopes below. 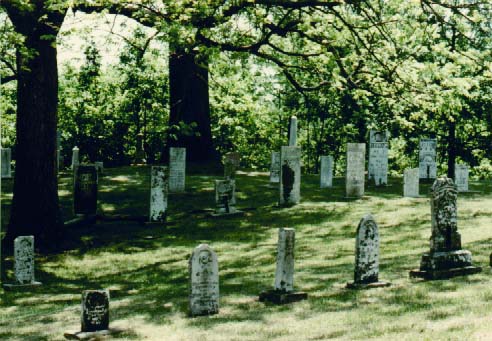 The still beautiful old rectangular tablets seem to hold quiet conversations with the dignified shields of the Civil War veterans.

Several large, influential first families to central Madison County are ensconced at this cemetery.  The Siglers not only give their name to this burial ground, but patriarch Jacob was the first to own the land upon which Frankton now stands.  Born in 1789, Jacob Sigler came from Virginia  with his large family and settled in the southwest corner of section 31.  According to the 1968 Notes on Indiana, a local history by grade school residents of Frankton, Jacob arrived in 1829 and, "blazed the trail for the first eighty acres...  It [his land purchase] is the section west of Washington Street on the range line, and extending north to and including the old Sigler Cemetery.  It goes south to the road between the old French and the K. of P.-I.O.O.F. cemeteries.  The eighty acre tract was cleared where before a thicket had existed.  The section was transformed into productive land."  The town of Frankton was actually named for relative Francis "Frank" Sigler who designed and helped develop it.  The first school house in the township was built on Jacob's land in 1836, and another relative Joseph Sigler "taught many terms of school in the township in an early day."

Jacob and wife Mary's large tablet-type stones, below, are among the more prominent in the oldest section of the Sigler. They are among many well preserved, legible, intact memorials from the 1840s and '50s.  Mary's stone, in particular, is in especially good shape and is an excellent example of the funerary art from the first half of the 19th century.  "Mary wife of Jacob Sigler died July 17, 1851/4 aged 55 yrs 11 mo & 9 days."  The weeping willows at the top of her stone symbolized, during the Victorian era, sorrow and mourning for the departed.  Jacob's stone has urns or chalices which represented his full life.  "Jacob Sigler died July 31, 1851 aged 62 years 4 mos 3 ds."

Another influential early family, the Dwiggins, also have a large contingent resting here.  Daniel Dwiggins, born in 1804, was a captain during the Civil War and died in 1879.  Relative Elijah Dwiggins opened the first store in the township, one mile west of Frankton in 1837.

John Dwiggins, who died in 1856 at "77 years & 12 d," would have been born circa 1779 as his stone, at left below, attests.  Margaret, his wife who predeceased him in 1841, was sixty-seven years old as the burial list records.  This would make her birth year around 1774; her stone is in the middle.   Elizabeth's stone, at right, commemorates "wife of Solomon Dwiggins."  This is fortunate for Solomon since he is not listed in the burial records attached.  He may be in an unmarked grave or he might have moved out of the county at some point after his wife's death.

The Dwiggins family contributed their efforts toward maintaining the union during the Civil War. In the middle is the stone for Capt. Daniel Dwiggins, mentioned in the text above.  At left is that for Srgt. Addison Dwiggins and at right that for infantryman William.

The family of Canaday/Cannaday/Canady is also of importance.  Caleb, listed among first settlers, was born in 1806 and died in 1860.  The family was of Scottish descent.  They immigrated to South Carolina in the late 1700s where Caleb and his father were born.  Caleb married Martha Dwiggins in 1827, and as early farmers to Madison County, the couple settled the family on the west bank of Pipe Creek where the nearest neighbor was two miles away.  From Samuel Harden's The Pioneer:

"Mr. and Mrs. Cannaday were industrious and comparatively poor when they came to the new county and settled on Pipe Creek, but they had come to stay, and by industry and frugality plenty soon came to them...They were honored members of the Christian Church and their influence for good lives to-day, though they sleep on the banks of their Pipe Creek home.

"Margaret, Harrison, Minerva, David, and Josiah were born before the family came to Madison County.  Albert, Mary, William O., John E., and Nathan were born in Madison County.  The family is a remarkable one, [for] two are doctors, one a banker, one served as auditor..." 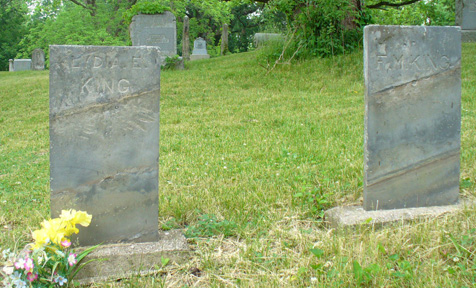 The stones for the Kings, "Lydia E." and "F. M.," obviously were not made by a professional stone cutter.  Perhaps, at the time, the relatives could not afford to purchase such, and someone later marked their graves with these crude, hand-made renditions.  The thick slate, however, is still standing, has retained the names, and is stalwartly representing these ancestors to appreciative descendants--as evidenced by the flowers at the grave site.

The family with the most members interred at the Sigler Cemetery is that of the Eytchasons/Etchisons.  They have thirty-nine members on the burial list.  Among the first families to the township, Jesse, Walter, and William Etchison came in 1832 from North Carolina.  Patriarch Jesse Eytchason, most notably, was born in 1771 and died in 1855 at eighty-four years of age; he was appointed township supervisor in 1833.   In that same year, relative Walter Etchison held the first township election in his log cabin. 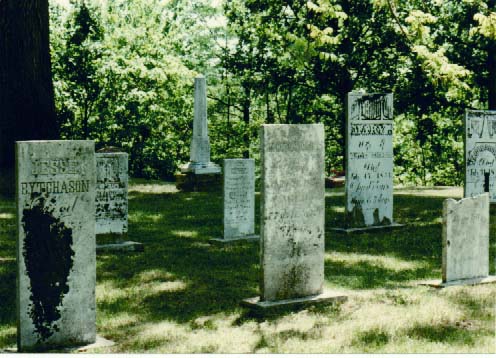 Above, Jesse Eytchason's stone appears in the left foreground in this close-up view of the well preserved, old section on the highest part of the long sloping hill which encompasses the Sigler Cemetery.  The markers for other pioneers Mary and Jacob Sigler are to the right.

Descendants of the early 19th century pioneers and later settlers continued to use the services of the Sigler Cemetery on into mid 20th century even though an association or business never took over the burial ground as was often the case with many other pioneer graveyards.  Therefore, it is remarkable that the cemetery has remained in such excellent condition.  The preservation of the Sigler might be the result of its location.  It is down a dead-end road, and the extent of the cemetery is visible from the road and the neighboring domiciles.  It is also to the credit of the township trustees in whose care over the decades the Sigler has remained.

Additional credit should be given to involved Madison County residents like Kimberly Heath, from the Anderson Ward of the Church of Jesus Christ of Latter-day Saints, and Boy Scout Mason Shoaf who was working for his Eagle Scout qualification.  In September 2011, they organized a cleanup of the old stones at the Sigler.  With the help of family and friends, a great deal of work was accomplished.  Stones, once made illegible by black mold and fungus, were turned into white readable memorials for the township homesteaders.

Pictures of the Madison County residents participating in Mason Shoaf's Eagle Scout project are above. 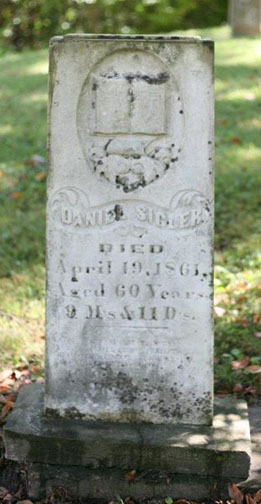 Stones for the Sigler family were greatly improved: above, Daniel; left to right below, Bennard, Elizabeth, Margareth, and Mary.

At left below is the now white stone for John Dwiggins who at death was aged seventy-seven, and by contrast on the right is the small child's marker for Jacob Potts who was only six years old when he died. 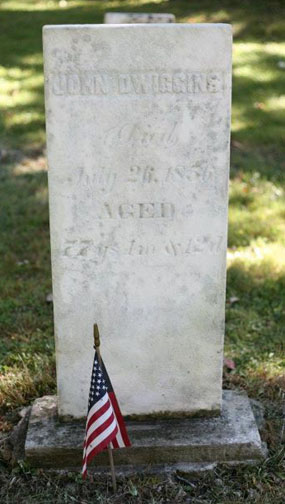 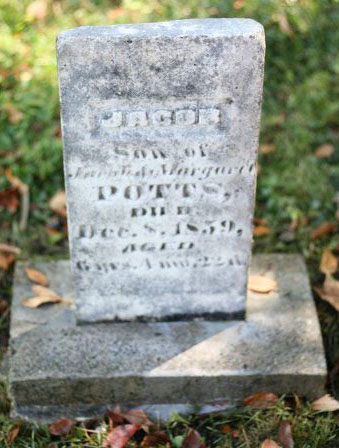 The character of the Stage Manager in Our Town might well be saying of all the families here, "They're waiting for the important part of them to come out strong."