The Williams family burial ground, pictured above, was the beginning of the Huntsville Cemetery.  The Williams Cemetery in the 19th century eventually included neighbors and friends of the family.  As is often the case, a modern 20th century corporation took over the family graveyard and added land to what was the Williams' farm plot. In doing so, the once small, secluded private burial ground became a special part of a much larger concern that now serves the greater Huntsville area. 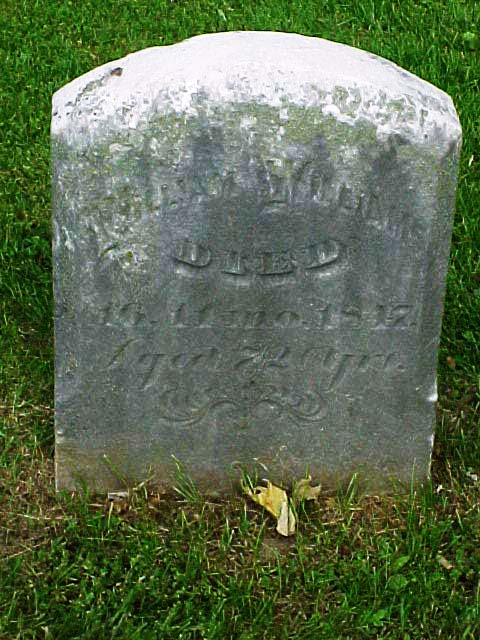 Patriarch of the Williams family, "William Williams died November 16, 1847, aged 72 years."  William was born in North Carolina in 1775.  He was one of the first  pioneer settlers to the east part of Fall Creek Township, arriving in 1821.  He settled the land, later called "Billy Williams farm," started the first nursery in the county, and at one point owned over 500 acres on Fall Creek.  William was the father of nine children among them Martin, Caleb, Miriam, and Anna.  Descendents still own the property he homesteaded, making his the oldest family-owned land in the entire county.

His stone is an excellent example of the type popular in the 1840s--short, square, and thick.  (For a picture of the Williams homestead, go to the Fall Creek Township page.)

Twenty-four others with the last name of Williams are buried in the Huntsville Cemetery.  The stones for three of those are pictured above: L-R, Hannah, wife of William Williams, was sixty-four years old when she died in 1847 one month before her husband; son Caleb was eighty-two when he died in 1888; and little Henry Williams was just "4y 4m 5d" when he died February 21, 1844.

Jesse Roberts and his wife Anna, 1807-1869, are included in the Huntsville.  Anna was a daughter of William Williams.  Jesse was born in Pennsylvania in 1801 and came to the village of Huntsville in 1843.  He was the village postmaster for sixteen years.  He was a member of the Society of Friends and a shoemaker by trade.  He died around 1877.

The members of the family for whom Huntsville was named are also, appropriately, represented at this burial ground.  Parents William and Eliza Hunt were from North Carolina, settled in the area in the mid 1830s, and like the Williamses, died only months apart with the wife passing away first. Eliza died July 21, 1855, and William followed October 25, 1855, at seventy-four years old.  They had two sons William and John, both of whom were doctors.  From county historian Samuel Harden's The Pioneer, Dr. William Hunt, born 1822, was "a splendid doctor, of fine make-up and florid complexion...and perhaps the best posted man that ever lived in the county on geology.  At his death [1890] he had a fine library and collection of specimens... Dr. William Hunt was a member and father of the Madison County Historical Society, and all his life, after its organization, was its honored president."    Dr. John Hunt, born 1817, "...read medicine, and his life was mainly devoted to the practice."  His first wife was Miss Elizabeth Bird.  She and four of her children are buried at the Huntsville.

Since the death rate among the young in the first half of the 19th century was as high as one in three, it is not surprising that many of the earliest graves were those for children.  George R. Booram is listed as a first land owner, and historian Harden also comments that George enjoyed attending meetings of the old settlers and pioneers of the county in the last half of the century.  Above, Susannah Booram  "daughter of George R." and Sanford Booram, "son of George R." were lost in 1847 and 1848 respectively.

Other first land owners represented by markers are left, P.R. Maul who died in 1867 at fifty-eight years; middle, John Tillson, who has a very readable stone; and right, veteran John Swain who died in 1857.

Folks who lived in the Victorian era-- i.e. most of the 19th century and the first few years of the 20th-- loved memorial symbols.  Catherine's bible at the top of her stone, left, represented her Christian faith.  The drapes on the two late century pillars, middle, symbolized mourning for the departed as does  Silas Trayer's weeping willow, right.

Listed as resting here is a prominent early government official.  William Roach was born December 4, 1809, in Ohio.  He came to Madison County in 1832, was elected sheriff in 1849, elected mayor of the city of Anderson in 1871, and also served as justice of the peace.  William was fond of reminiscing at old settlers' meetings often held in the last fifty years of the 1800s.  One of William's stories, which historian Samuel Harden relates, is as follows:

"He [William] went 'sparking' on a certain occasion, and remained over night.  Upon  retiring, he took off his pantaloons, as most people do, and laying them by the bedside, slept till morning.  On waking in the morning, he reached for his pantaloons, but they were gone.  Where?  While he lay there perplexed, with breakfast waiting in the next room, a search was instituted, and the garment found under the house.  A sly pet 'coon had pulled the trousers through a small crack in the puncheon [wood] floor.  He was soon dressed, however, and ate a hearty breakfast as if nothing unusual had happened."

William Roach, early settler, story teller, and government official, died February 11, 1893.  He and his wife are both buried at the Huntsville Cemetery.  His picture appears in the 1880 History of Madison County, Indiana, page 87.

Below:  The newer section of Huntsville Cemetery as seen from the Williams' knoll. 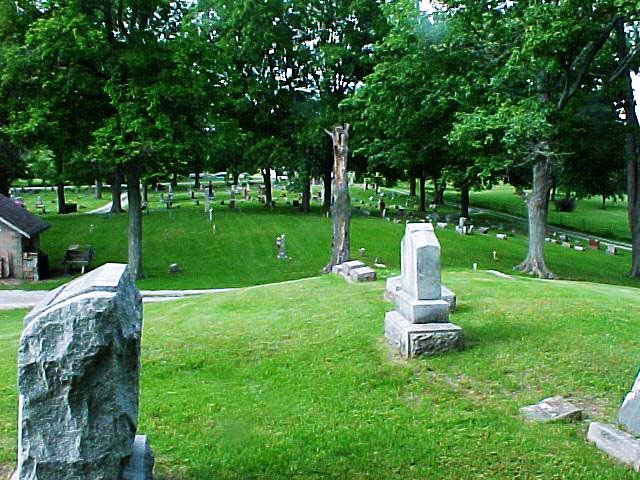