Location: north side of North Street at the end of Skyview Drive, one-half mile off of SR 32 in Chesterfield 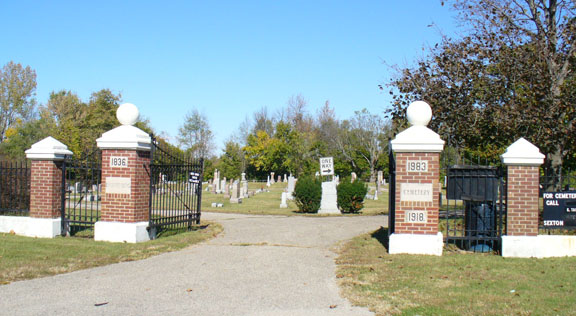 As the dates on the gateposts explain, this cemetery was begun in 1836 by the Bronnenberg family and is situated on what used to be a Bronnenberg farm.  A brick Victorian farm house built a little later in the century by Carroll Bronnenberg is located across the road just west of the cemetery.  The Bronnenberg  was a private graveyard even up until 1895 when historian Samuel Harden was publishing The Pioneer.  With the help of a donation in the 20th century by descendant Estes Bronnenberg, 1892-1966, the cemetery was incorporated into a burial business serving the town of Chesterfield and surrounding area.  The stone pictured below left tells of his contribution and greets the visitor upon entering the gate.

The stone above right is for Frederick Bronnenberg, Sr., early pioneer and patriarch of this prominent Madison County family.  An unpublished account produced by descendant David Bronnenberg and presented to the Madison County Historical Society provides some background.  Frederick was born in Germany, possibly near Berlin, on January 1, 1775, to an important family who originally spelled their last name "Brandenberg."  According to the family story, Frederick and his brother were sent to America by their mother in order to avoid the German draft.  They came in 1791 when Frederick was sixteen.  Like other immigrants looking for their own land, the brothers traveled west, but while in Pennsylvania, on August 24, 1806, Frederick married Barbara Eastor/Oaster, who was herself of German heritage.  The couple eventually had twelve children, eight of whom lived to adulthood.  The first four were born in Harrison County, Virginia.  Continuing their migration, the couple's next four were born in Richland County, Ohio.  Frederick's brother and his family settled near Mansfield, Ohio, and retained the original spelling of "Brandenberg."   The Madison County pioneer continued west and somewhere accepted the Hoosier spelling and pronunciation of his surname.

While the American Legion's Cemetery Record of Deceased Veterans lists Frederick, Sr., as a veteran of the War of 1812, the family history does not include this.  The unpublished document does say the he was the third settler to come to Union Township in June of 1821.  There are two scenarios as to why the Bronnenberg family stopped here.  One relates that they were originally headed for the "prairie country" in the Illinois territory.  A Bronnenberg child died, and the family decided to stay where the child was buried.  Another states that one of Frederick's oxen broke down.**  Unable to travel further, he was aided by William Dilts who informed Frederick of the disserted cabin of McChester, the frontiersman, where the family could obtain shelter.  The family stayed through the winter, and the next spring built their own cabin north of White River.  Here in the Hoosier hinterland, the Bronnenberg couple had their last four children, put down roots, and eventually upgraded the cabin to a log house situated on a hill "above the Bronnenberg Ford overlooking an extensive meadow located in a bend of White River."

The many acres that Frederick purchased in succeeding years not only contained excellent trees for lumber but also excellent land for cultivation. Between 1823 and 1835, Frederick bought over 550 acres in sections 3, 10, 14, 15, and 16 in Union Township.   The farm in section 16 that Frederick Bronnenberg, Jr., 1812-1901, inherited from his father included the ancient burial mounds of the Adena/Hopewell people.  Frederick, Jr., is credited with preserving during his lifetime those archaeological treasures. (For more on Frederick, Jr., and Mounds State Park, go to Union Township page.)

Frederick Bronnenberg, Sr., was not only a farmer but also a tanner by trade; he could convert hides into leather.  He started the first tan yards in the county as early as 1831.  In 1837, he built a saw mill to turn timber into lumber and a grist mill to grind grains into flours and meals.  These were some of the first mills in the county.  He later added a carding machine for turning wool and cotton into fibers for making cloth.  The Bronnenberg family became wealthy, and Frederick, Sr., and his sons eventually owned numerous farms in various townships.

The patriarch of the family who helped change the untouched forested wilderness into a community of successful farmers also interested himself in civic affairs.  Frederick was a member of the first grand jury in the county in 1823, which heard the case of the white men accused of the massacre of Native Americans for profit (go to the Madison County history page for more).  Frederick and family are listed on the 1830, '40, and '50 census records, and in 1850 he was elected county commissioner.

When Frederick and Barbara lost their eighteen year old son Isaac September 19, 1836, the father buried him on a little knoll in a corner of the farm overlooking the meadow.  It is here that the private graveyard for the large family was continued with two unnamed infants, one in 1841 and another in 1842.  Then Lura died in 1846 and Sarah in 1847, both one year old.  Those are the Bronnenbergs with the earliest gravestones. The Bronnenberg Cemetery would eventually hold over 130 members of the family.  The stone, above, commemorating Frederick, Sr., 1775-1853 and wife Barbara, 1788-1857, is of a later architectural period; it was erected by appreciative descendants.

The large grey monument above is for Frederick Bronnenberg, Jr., and wife Hulda.  Frederick, Jr., is credited with preserving the Adena/Hopewell mounds which are around 2000 years old.  The mounds form the basis for beautiful Mounds State Park.  The other stones surrounding this memorial are also for members of the Bronnenberg family. 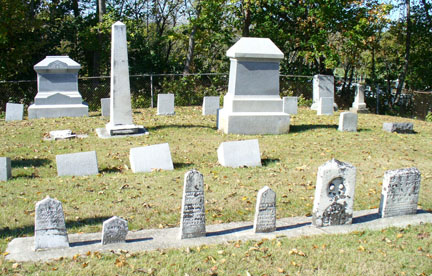 Of the 130 Bronnenberg family members buried here, over twenty-five were children born in the 19th century.  The death rate among the young then was often as high as one out of three.   In the picture above, the tablets reset in cement from mid 19th century, in the foreground, and the later square blocks, in mid ground and background, mark the graves of children.  In fact, from this view there are only four stones for adults; all the rest are for children.

As was the custom of the time, the family burial ground were offered to friends and neighbors when they lost loved ones.  The Nelson family had three unnamed infant daughters die, one each in 1839, '41, and '42.  Bodle, Forkner, Pugsley, Thumma, Thomas, and Fitts are other surnames of early Union Township settlers buried here.

As viewed from northwest corner on the Bronnenberg knoll, in the picture below, the cemetery since its incorporation in mid 20th century, has grown. Sections, stretching towards North Street, have been added and have served the residents of modern-day Union Township and Chesterfield as well as the Bronnenberg family.

**In the summer of 2007, an old skull of a large ox was discovered buried in Mounds State Park, just northwest of the Bronnenberg house built by Frederick, Jr., and wife Hulda.  The skull was sent to the Department of Natural Resources for analysis as to age.  Results will be posted.