The Woodward-Gwinn cemetery is one of the earliest burial grounds on the west side of the county.  It sits on the north side of SR 32 between Anderson and Lapel and so is visible to the many motorists along this busy route.  Edith Cascadden's 1938 History of Lapel and Fishersburg discusses the cemetery's beginnings:

"...the land on which [the Woodward-Gwinn Cemetery would eventually be] located was entered December 6, 1833, by Andrew Gwinn, who transferred it to William Gwinn.  From him it went to James Gwinn...  From James Gwinn this small square of land was bought by John Huntzinger for the sum of $8.30...

"There is a sad little story to be read between the lines of these old records.  For Susanna, John Huntzinger's wife, had died February 9, 1851, at the age of 65.  On May 30, 1851, Mr. Huntzinger bought this ground, and June 9, 1851, donated it to James Gwinn and Thomas Busby, as trustees, and to their successors in office as a burying ground.

"The deed cites that the tract was thirteen rods square and contained 'one acre and nine rods, more or less.'  Samuel E. Busby and Isabella, wife of Thomas Busby witnessed the deed; John Anshutz, the Justice of the Peace, made the deed.

"While Susanna Huntzinger's grave was the first in this cemetery, one of the early tombstones is that of 'Isabella, daughter of Samuel and Elizabeth Gwinn and wife of Thomas Busby, died 1852, age 53.'

According to Huntzinger/Huntsinger genealogist Cheryl Huntsinger Bunn, the Susanna, mentioned above, who was the wife of John Huntzinger and for whom the cemetery was started, had the maiden name of Lichty as supported by DAR records. Susanna's death date of February 9, 1851, and age of sixty-five years would make her birth date around 1786.

Among the prominent families in this area were the Fishers.  Charles Fisher, whose tall stone is pictured at right, lived to be ninety-three, came to the area in 1820 with his father Benjamin (see Stony Creek Township page), remembered the pioneer existence very well, and was interviewed for an article entitled "Early Settlers," which appeared in a local Lapel newspaper of 1903.  The pioneer way of living in the Madison County wilderness of the early 1800s, which he relates, is a stark contrast to the lifestyle of the 21st century:

"...After he [Charles] became a young man he paid his respects to Lucy Jane Busby, and in September 1840 they were married by Lucien Emmons, a Methodist preacher, both of the young people being members of that church.  They lived with Mr. and Mrs. Busby that  winter.  During which time Mr. Fisher cleared 7 acres of timber land...for which he received $14.

"In the spring they had one small horse, one cow, 2 hogs.  They made about 200 pounds of maple sugar, which they sold for 4 cents a pound.  They bought a cheap set of knives, forks and plates, one teakettle, one stew pot and one 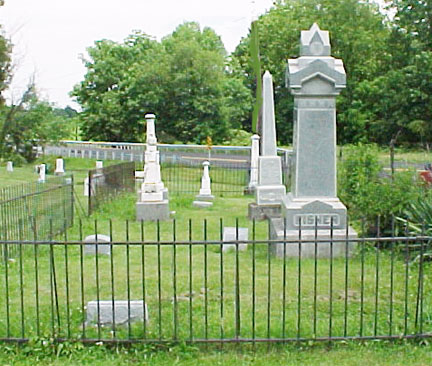 frying pan and with this modest outfit started housekeeping.  They needed no stove--there were none in the country then, all the cooking done before the fireplace.

"Everyone was his own shoemaker in those days.  They tanned their own leather and though the shoes were not fine to look at, they wore well.

"Mr. Fisher tells how the houses were lit up, as he first remembered it.  The children would pull shell bark off the hickory trees, put it in the corner and light it.  Later on they would take the top off a turnip, scrape the inside out, put in a stick with a rag wrapped all around it, then fill the turnip with coon oil.  When the rag was lit it gave a very good light.

"Mr. Fisher early allied himself with the Democratic party... believes in respecting the political and religious opinions of others...and cast his first vote in 1844 for James K. Polk, who was running against Henry Clay, the Wing candidate.

"Mr. Fisher has a number of relics of the past, among them being a large powder horn that was carried by his grandfather through the Revolutionary War and later by his father in the War of 1812.  Where it rubbed on their side, while being carried, it is almost worn through.  It is made of a cow-horn, and has a wooden cork that screws in.  On the horn is carved pictures of birds, etc., with his father's initials.

"He also has...a lock of his mother's and of his grand-mother's hair."

Mr. Charles Fisher eventually became Fishersburg's first merchant, postmaster, and one of the township trustees.  He was proud of saying that he was the first person to drive a team and wagon over the Pendleton-Strawtown Road (SR 38) in 1832.  He died in 1913; his wife Lucy died in 1886.  They are buried in the fenced family plot with other members of their family.

Not listed below on the record of gravestone transcriptions, by some oversight, the stone for Daniel and Mary Huntzinger and that for a Graber infant are pictured above.  From family genealogist Gene Majors in California, the Grabers and Huntzingers  are connected by marriage.  The Graber/Kroeper name is Bavarian, and the "M & E.E." on the infant's stone at right stands for Marion and Emma Elizabeth Cushman Graber. Marion Graber is mentioned in the section on Stony Creek Township in the 1880 Kingman history of Madison County: "March 6, 1876, a post office was established at the Graber's Station, called Bruin, and Marion Graber appointed Postmaster..."  While Marion and his wife lost a son "Sep. 2, 1882, aged 5m 14d," they had a total of seventeen children, ten of whom grew to adulthood according to Gene.  Francis Marion ("Marion") Graber's father was Sebastian Graber, who had come to America from Bavaria in 1832 along with his parents.  Sebastian's father Andrew died in Wayne County, Indiana, in the early 1800s.  Sebastian's mother Mary Knoll later married a Huntzinger--Daniel.

The stone for Daniel and Mary Huntzinger is pictured left and middle.  Their union produced one daughter Mary who later wed Samuel Wolfe.   Mary, Daniel's wife, died September 26, 1878, "75y 5m"; Daniel died a month later October 23, 1878, "81y 4m 17d."  While Daniel and Mary and other Huntzingers lived out their lives here in the Hoosier state, the Graber family, according to Mr. Majors, moved to Alabama in 1884, leaving only one son buried next to relatives Daniel and Mary at the Woodward-Gwinn Cemetery.