Respect for the past is evident in all generations.  The Waymire Cemetery, holding some of Duck Creek Township's earliest settlers, is situated on the line between sections 2 and 35 in the southern part of the township.  In the mid-1800s, public roads were being planned and constructed.  What is now labeled as county road (CR) 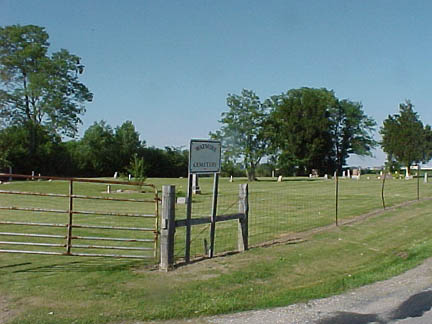 1400N was originally to run on the section line, and this, of course, would have destroyed the burial ground.  When the obstruction was realized, plans were changed, and the road was diverted to go around the edge of the cemetery.  Thus, when traveling on CR 1400N, one cannot miss the Waymire's location.

According to Marjorie Miller Pierce's research for her 2005 publication of Waymire Cemetery, the plan for the state's roads was changed because the township owned the cemetery.  The township's title to the cemetery was the result of two families who wanted to preserve the cemetery on its original location:  "The Hand family and the Waymire families owned the ground that the cemetery was on.  The Hand family donated one acre and the Waymire family donated 38/100 of an acre.  This was the dividing line between the two pieces of land."  Mrs. Pierce also explains in her book that initially there was on the west side of the burial ground a road, no longer existent, which ran north to CR 1500N.  Also there was a small log church near the cemetery.  Perhaps it was this shelter in which the first township elections were held in August of 1852.  History records that those elections took place in a "log building" near the Waymire Cemetery.  Elliot and David Waymire were elected, respectively, as justice of the peace and treasurer.

According to early MCHS records, relative Jacob Waymire, 1781-1857, patriarch of the family, is resting at this location.  He married Elizabeth Fuller and after moving to the area, built the first steam sawmill in the township seven years befor 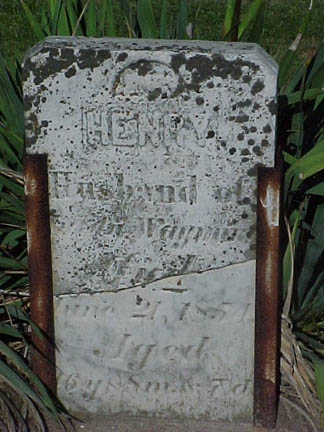 e his death. Jacob's son Henry, 1808-1854, whose original gravestone is pictured right, married Hulda, 1809-1891, daughter of John and Huldah Boswell, according to Pierce's records.  Henry and wife Hulda have a metal, turn of the century marker placed by descendents.  The epitaph on the base reads:

"Two lights are from one household gone,

Two voices we loved are stilled:

Two places vacant at our hearth,

Which never can be filled."

The Ritter section, shown above, has old stones which have been reset in cement and around which vegetation killer has been sprayed, giving a very tidy appearance.

Another early settler born in the 18th century and buried here is Alanson Bagley who, according to Pierce, was born in 1796 in New York.  Alanson's wife Nancy was born in 1810 in Pennsylvania.  The two had seven sons and three daughters.  Two of the sons were killed in the Civil War.  Alanson owned 120 acres in the township.

Among the later settlers to area was the Robert W. Davis family.  According to family genealogist Tom Davis of Elkhart, in 1896, Robert's wife Mary Jane had difficulty during child birth, and she and the baby, a son also named Robert, both died.  They are the only members of the larger Davis family to be buried at the Waymire.  While one branch of the family stayed in Madison County, Robert, the father, and other relatives moved on into Illinois. 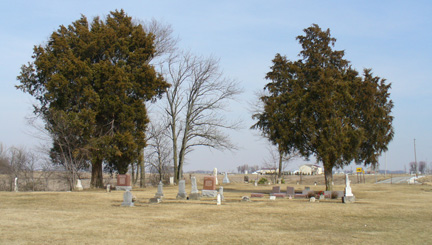 Recorded in the burial list at the bottom is a stone simply marked "Decker."  Descendants believe that this stone represents one of the earliest settlers to the area encompassing the northwest sections Duck Creek Township, Madison County, and to its west the whole of Wildcat Township, Tipton County--David Decker, 1814-1888.  David migrated from Wayne County, Kentucky, to Madison County and purchased land as early as 1837 in Duck Creek Township.  In the early 1840s, he moved across the county line to Tipton County.  From "Wildcat Township," History of Tipton County, Indiana:

'Records prove that the first actual white settlers came in near the year 1845, and located near the north fork of Wildcat, in the northern part of the township. These were David Decker, Philemon Plummer, Robert Stephens, Ira Plummer and their respective families. Decker came from Madison county, adjoining, and erected a primitive pole cabin, around which a few rods of ground were cleared for a truck patch. However, the wet state of the county precluded a very bountiful living from the soil, so Decker was forced to depend upon his rifle for his main subsistence. Game was plentiful, and the meat used for the table and the skins used as a medium or exchange or for clothing. Decker lived on his original claim some five years, when he disposed of it and moved farther south, near the present site of Windfall. Here he became the possessor of a valuable tract of real estate... He was a man of prominence in his community and was chosen a justice of the peace at the first election after the township organization...'

Also from the same publication:

'The first school was taught in a rude cabin which stood near Mud Creek in the northern part of the township, about the year 1848. This building was hastily constructed by the few neighbors living in the vicinity, and served its purpose about three years. The first pedagogue who wielded the rod of authority at this place was David Decker, who is remembered as a very competent instructor for that day.'

Family records show that David spent some of his later years living in a simple log cabin near the Waymire Cemetery.  Becoming somewhat infirm of health--from at least 1880 until his death in 1888--David resided with his daughter and son-in-law, Julie and Joshua Wood, in the growing village of Elwood just to the south.  Since David is not listed in any of the pioneer or modern cemeteries for Madison or Tipton counties, family members believe that he was interred near his last log cabin home, with the other early settlers of his generation, and under this simple stone marked "Decker" at the Waymire Cemetery.

Information on our pioneer cemeteries comes from various sources and often not from our county.  Gae Matchette, Secretary for the Tipton County (Indiana) Historical Society, sent us the information below in January of 2015.  According to their records, a William H. Black was interred at the Waymire in 1901.  Since Mr. Black is not listed on the transcription of gravestones done at this cemetery in the mid 1970s, it must be assumed that he never had a marker at his grave or that his tombstone was lost before the transcription was preformed.  We thank Ms. Matchette for the information, and indeed we appreciate assistance and additional data for any of our pioneer cemeteries.