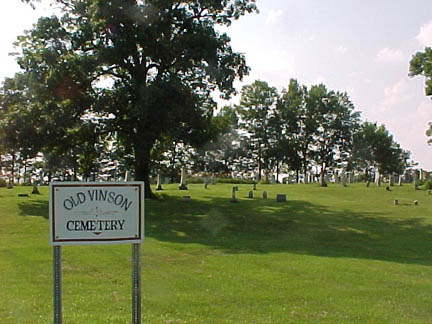 The Old Vinson Cemetery has seen a lot of changes in its one hundred and fifty plus years.  It still is located on a hill south of Summitville, but the cemetery in the 19th century used to be approached from the west; now it is approached from the east.  The 1876 plat map for Van Buren Township shows this cemetery located on the east side of the old Fort Wayne Trace. This settlers' "highway" would have been the service road.  The cemetery gate and/or drive would have been on the cemetery's west boundary, and people would have entered from this direction.  In fact, the old gravestones all face the west.  The Fort Wayne Trace has long since disappeared, swallowed up by the surrounding farmers' fields; however, a slight depression, showing where it used to run, can be distinguished in the grove of trees on the other side of the west boundary fence in the southwest corner of the old section.

Since the New Vinson Cemetery has taken charge of its predecessor, land has been acquired and added to the east of the old burial ground.  The approach has been changed, and the gates and drives are now off of CR 100E.  The old markers seem to have their backs turned on the modern age.  They are looking onto a wide expanse of farmland instead of the old trace's travelers and wooden vehicles.  All the activity is now occurring from the opposite direction, behind their stone faces.  The Old Vinson sign at the back of the north section of the new part alerts visitors that across the little meadow and up the hill the old markers are waiting--a little disgruntled in appearance, perhaps, but friendly enough.

Patriarch of the Madison County Vinson family was Elijah who was born in 1788 and died in 1849. He is on the burial list below. There are over eighty of that surname recorded for the entire burial ground.  The 1876 plat map shows members of the family owning over 500 acres surrounding the little cross designating the cemetery's location.  The family, of course, began this private burial ground, but out of 19th century tradition and general consideration, once a graveyard was begun, its services were offered to the neighboring farmers.  Over the decades other settlers became represented: the Allens, Cartwrights, Dobsons, Thurtsons, Vickerys, and Parkhursts among others.  Various stones for the Vinson family are displayed below. 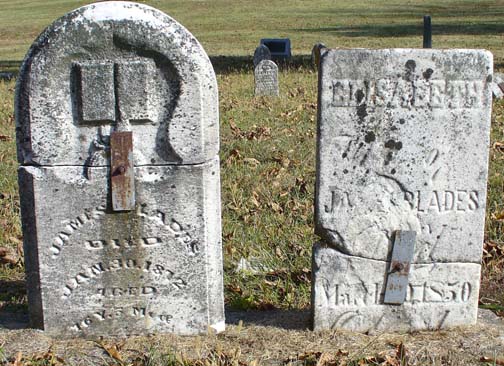 The Cartwrights, below, and Blades, above, are given special distinction by the 1880 History of Madison County, Indiana as being among the first pioneers to the township between 1830 and 1836.  Both settled in section 31 which is just south of the cemetery.  James and wife Elizabeth Blades have markers side by side, above.  She died in 1850, and he in 1872.  Thomas Cartwright and his wife Basheba are commemorated on the tall pillar, below right.  Miles Cartwright, below middle, is not recorded on the burial list by some oversight, and Spencer's nicely preserved stone, below left, states that he died in 1847.

The Allen family were some of the earliest settlers to Van Buren Township.  Reuben, Harrison, and Hiram are listed individually in county historian Samuel Harden's The Pioneers as among first land owners in the area.  The 1876 plat map shows members of the family owning about the same amount of land as the Vinsons, to the south and west of Summitville.  The Allens had one of the first schoolhouses in the township.  Evidently, they also have descendants researching their genealogy since Abram's stone, below right, has been decorated.

Three of the Allen stones pictured have the weeping willow motif above the names.  This symbol stood for the mourning of those left behind.  Traditional figures at the top of flat tablet-type stones, like these, were popular in mid 19th century.

Later in the time period, three dimensional grave markers became popular.  Jos. A. Allen's scroll with leaves, below center right, is draped over a tree trunk.  The tree represented the family and its roots or heritage.  His wife's scroll over a podium, below center left, has a rose which symbolized love.  Also fashionable in the late 19th century were architectural forms such as Jane Allen's structured pillar, below right.

Genealogists seem to abound in Van Buren Township.  Center below is the relatively new marker for another first family, the Plows.  Henry's original stone is below left; Ann's original is missing.  The tall stone behind the replacement is that for Arthur Plow who died in 1850 at fifteen years.  Perhaps Arthur was Henry and Ann's son.  Another new stone provided by descendants is at right for Mary Reavis, 1803-1854.

The Moores were also among the very first to inhabit the area.  John S. Moore moved from North Carolina in 1836.  His wife Mary J. died in 1881.  On her stone above the hand pointing heavenward is the phrase "Gone Home."  Nancy's stone, right--one of the few needing reset at this cemetery--is one of the earliest.  She was the daughter of Samuel Moore, and she died in 1845 at nine years of age.

The Vickery family must also have been among the early settlers.  Vincent's stone, below left, is dated 1853, and he was fifty-nine years old, making his birth year around 1794.  Ferebee, P. Sr., David, and Willis follow left to right.

There are only two Atwells listed on the burial records for the entire cemetery, but they do have stones in this old section, which places these residents among the people who helped turn this untouched wilderness into a community.  The stone, left, for James is still very crisp and legible:  "James T. Atwell died May 28, 1871 aged 74 Y. 2 M. 20 D."  James's birth year would have been circa 1797.  His son Joseph, who died in 1866, was thirty-one when he passed on.

Other families that contributed to Van Buren Township's development left members reposing at the Vinson Cemetery.  Hannah Stanley's pretty early Victorian marker is left; Lavana, "wife of Robert Carlton," has a broken tablet, middle; and Almira's stone needs resetting.  The dove at the top symbolizes her innocence; she was just two years old when she died in 1876.

The tablets for other mid century female family members are left to right Martha Noland, Mary Trent, and Martha Dobson.

The simple stones for Nathan Jones, John Helm, John Weers, and Henry C. Williams are below, left to right.

The more complex styles of memorial architecture are shown by the markers for Phillip Creamer, Nicholaus Weers, Ransom Sisk, and James Ayers, left to right.

As in many burial grounds operating in the mid 19th century, there are veterans from the Civil War.  The Vinson has the distinction of having not only several veterans from the northern states but also Joseph Kirkpatrick, below left, who fought in the Confederate States Army.  James. M. Bragg, below right, from Co. O. 9th Indiana Infantry, represents his comrades.