This picture of St. Mary's Cemetery was taken looking to the east.  A St. Vincent's Hospital building is in the background on the left.  The hospital is across the street from the entrance to the cemetery.

According to historian John Forkner, the earliest Catholic mass in Anderson was delivered in 1837 in a log tavern that stood at the corner of Central and 9th Street.  This was done by missionaries to the workmen on the Indiana Central Canal.  However, it was 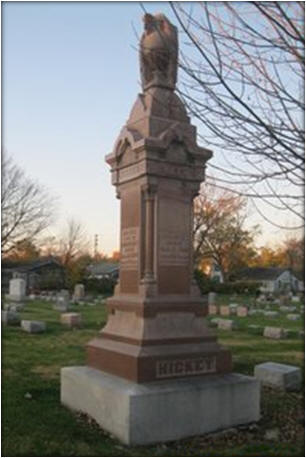 not until 1857 when Father Clark became a resident of Anderson that the area had a permanent Catholic presence and a church structure.  Ten years later in 1867, St. Mary's Cemetery was established as the parish burial ground.  One of the county's earliest benefactors is interred at this location.

John Hickey is the reason Anderson had for almost a century a St. John's Hospital.  Mr. Hickey gave to the Sisters of the Holy Cross his farm and home for use as a hospital for the benefit of area residents.  John was born in County Wicklow, Ireland, and settled in Anderson in 1853.  Here he had a successful restaurant and grocery and in 1884 purchased a farm that extended from 19th Street through 22nd.  This property is across the road from St. Mary's Cemetery.

Hickey and his wife Maria were Catholic, and both are buried at St. Mary's.  Maria had become seriously ill in the early 1890s, and the Sisters of the Holy Cross nursed her at the Hickey farm home.  After Maria died in 1894, John deeded the farm to the Sisters for use as a hospital for the community.  They actually used his frame farm house as their first hospital building. Thus we have the beginnings of Anderson's St. John's Hospital which eventually was purchased by the St. Vincent's network.  In the main entrance area to the modern building, there is a life-size, detailed mural on the north wall depicting the farm as it looked in the early 1890s.  John Hickey, his family, the Sisters, the buildings, and all the animals are presented as they looked in real life.