Location: east side of Alexandria Pike, south of CR 600N 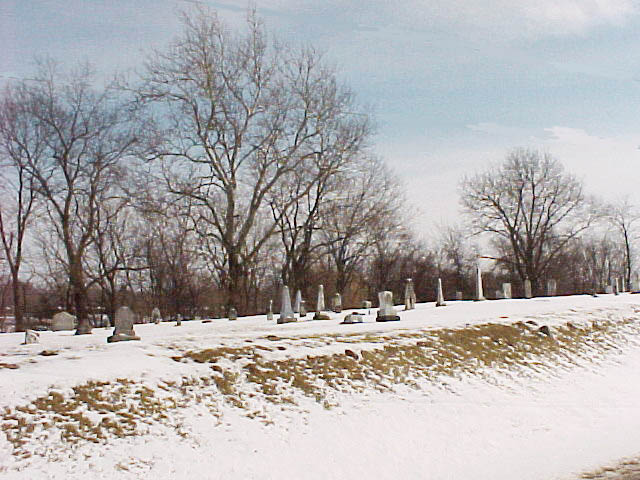 Because it is located at the point where Alexandria Pike blends into and becomes SR 9, the Smith Cemetery is one of the most prominent pioneer burial grounds in all of Madison County.  Alexandria Pike seems to have cut into the hill upon which the cemetery rests, making it appear that the Smith is hovering above the busy traffic.  The picture at left shows the cemetery from the junction of the two roads.  The brush and trees along three sides of the cemetery have been removed so that this pioneer graveyard is visible to all who live and travel in the area.  This is one method utilized by the MCCC to protect pioneer cemeteries: expose them to the living so that people know their location, can appreciate their significance, and accept them as part of the beautiful environment around them.

According to family genealogist Phyllis Davis, her great-great-great grandfather is buried here in an unmarked grave.  Malachi Relfe was born October 18, 1811, in Pasquotank County, North Carolina, the son of Josiah Relph who was born in 1788.  Malachi married Mary Albertson who was born in 1812 in the nearby Suttons Creek area of Perquimans County, North Carolina.  From records, the couple had a total of seven children.  Sometime after their first, Albertson, was born in 1833, they moved from the east coast to the Midwest since the other six children were all born in Madison County: William in 1837, Pherabe in 1840, Sarah in 1843, Margaret in 1846, Martha in 1849, and Cemantha in 1854.  Malachi died March 5, 1870, according to Phyllis, and while neither he nor his wife is recorded--by some oversight--on the burial list below, his wife does have a stone.  Mary (Albertson) Relfe's stone is on the right in the picture below and shown as a close-up below that.  The Alberstons descend from an Albert Albertson who was born in 1642, probably in New England according to most records.  In the mid 1600s, he moved his family south to the Perquimans-Pasquotank corner of North Carolina.  The stone, on the left below, for Samantha Relfe, who married a grandson of Malachi and Mary, shows that she died June 14, 1860 when she was only eighteen years of age. The Virginia Belfe/Relfe, who is recorded on the burial list as passing away at forty-four years of age on February 28, 1879, was actually a daughter of George Smith, the man who first purchased the land and for whom the cemetery was initially named.  Virginia married Malachi and Mary's son Albertson, thus the reason for the Smiths and Relfes being buried near each other in the oldest section of the cemetery.

Close-ups of the square-topped stones in the picture above this row show well preserved markers which seemed to have been carved by the same hand.  All three are from mid 19th century.  George Smith, middle, was born in Virginia in 1799 and is the one who first owned the land upon which the cemetery is located--thus the name.  Samantha, left, and Mary, right, are both from the Relfe family.

Three stones for children are above: left, one stone for "children of T & E Groendyke," and, middle, a prettily shaped, but indecipherable stone.  At right, "Caroline, daughter of George & Margaret Smith died Feb. 1, 1845 7yr. 8mns. 11ds."  Caroline's stone is the oldest legible stone in the cemetery, and therefore, Caroline's death may have been the reason why the Smith family began the cemetery which was utilized throughout the decades by other folks who lived nearby.

While the Smith Cemetery is no longer being used for burials, family genealogists still decorate certain graves.  In the fall of 2008, the white decorative chain and post fence was added by the Richland Township trustee and the MCCC to help frame this very visible pioneer burial site.