The Seybert Cemetery is a good example of how a respect for the past can co-exist with the needs of the present.  This family burial ground is now located in the middle of the Irving Materials Inc. (IMI) stone quarry.  Among the huge piles of rock and gravel is a small bouquet of trees marking the presence of the graveyard and reminding the heavy equipment and loaded dump trucks swirling around that people “rest” here.

The Seybert family is listed in Samuel Harden's The Pioneer as early farming settlers to Fall Creek Township.  Nicholas Seybert, the fourth on the burial list below, was born in Virginia 1801, and the Hillinah listed was his wife. The couple had four children.  After coming to the Fall Creek area around 1823, Nicholas set up a homestead, worked the untouched land into a farm, eventually became a county commissioner, and died at sixty-four years of age in 1864.

Also in the same small family graveyard are Nicholas’s parents James, who died in 1842 at sixty-one years old, and Ruth, who died in 1849 at seventy-three years old.  Two of James’s brothers, Henry and George, and their families also migrated to the area.  These Madison County pioneers descend from the Seibert family who immigrated in 1738 to Berks County, PA, from the Saarland area of Germany.  Ancestor Jacob changed the spelling of the last name from Seibert to Seybert.  Relative Jacob was a captain in the French and Indian War in the mid 1750s, and Nicholas’s grandfather Henry moved the family to Virginia where Nicholas and most of his siblings were born. The Seybert family, like most Hoosier pioneers, were strong minded people who came to set up a new home and help turn the Hoosier wilderness into a community.

Like most pioneer family graveyards, the Seybert was started on high ground in what was then a reclusive area of the property.  By custom and necessity, they often eventually included the lost loved ones of neighboring farming settlers, thus the two Browns and William Weir who also have stones here.  As with any pioneer cemetery, historians must also consider that there may be graves at this location that have lost stones or which were never designated with a marker.  Therefore, the burial list below may be only partial.

The Seybert family owned the graveyard and surrounding property until 1875.  It was thereafter sold or inherited through successive private ownerships until 1992 when the land was purchased by Irving Materials Inc.  At this point the Madison County Cemetery Commission’s secretary Georgia Lyons researched the family’s genealogy and the land’s history.  State laws had been in place since 1973 protecting pioneer cemeteries from destruction and/or desecration by private citizens or businesses.

IMI has proven to be an excellent guardian for the Seybert family's burial ground.  If the stones were defaced by anything other than time and weather, young vandals, before IMI's purchase of the property, are the most likely culprits.  In October of 2008 an IMI spokesperson said that the company was executing its "good neighbor policy" when he informed Mike Hart, then township trustee, that the company would be paying for and installing a new white vinyl fence around the cemetery with decorative gates.  The existing farm fence, gate and sign were only functional components erected in mid 20th century.  Mr. Hart and the MCCC were surprised and extremely pleased at this development and extend enthusiastic appreciation for IMI's effort in showing how the past can co-exist with and even beautify our busy modern world. 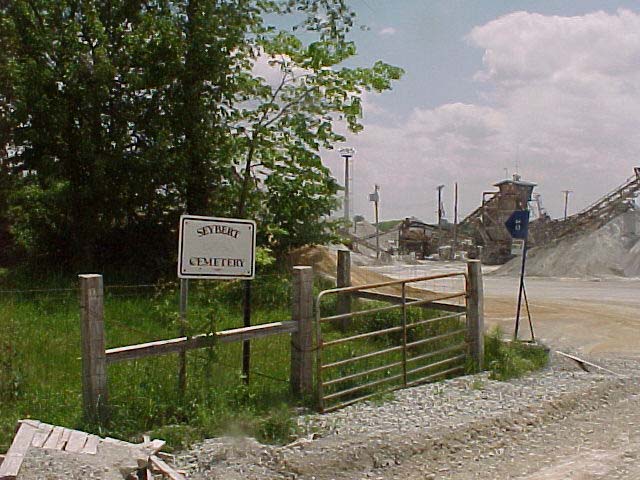 Even in 2004, above, the Seybert's farm fence and gate were merely functional. 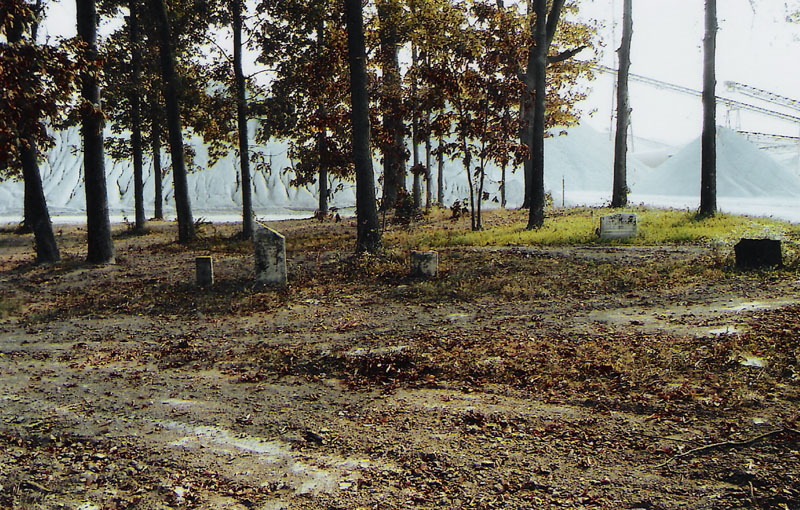 IMI workers stripped the boundary, above, of the cemetery's old fence, posts, and gate, and cleaned the area of heavy undergrowth.  Now there is a clear view of the mountains of stone in the background.

The finished scene below is "pretty as a picture."

To be safe with the big machinery in the quarry, visitors should ask permission to see the cemetery at the IMI office just inside the entrance gate.

In the fall of 2017, the gravestones, above, from the Hardy-Culp Cemetery (follow link for burial list), which was destroyed in mid 20th century, were placed as memorials in an open area (no burials) in the northwest section within the Seybert's fencing.  The Madison County Cemetery Commission wishes to thank IMI officials for their cooperation and our stone setter Stephen Beltz for taking on and completing this difficult project.