According to the American Legion's Cemetery Record of Deceased Veterans, a pivotal figure in American history rests in this little pioneer cemetery in Madison County.  The Legion lists David Gooding as a veteran of the War of 1812 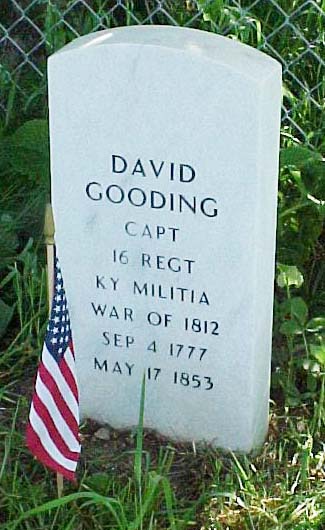 and buried in grave 2, row 1, lot 1. David Gooding was actually a captain during that conflict and served as an aide-de-camp under Colonel Richard Johnson.  As related by Gooding's grandson Judge David S. Gooding in historian Samuel Harden's The Pioneer,  Captain David Gooding fought in the Battle of the Thames and was responsible for killing the Shawnee leader and warrior Tecumseh.  According to historian John Forkner, Colonel Johnson was wounded at the Battle of the Thames by Tecumseh, and it may have been at this juncture that Gooding killed the Shawnee chief since aide-de-camps stayed close by commanding officers whom they would be assisting.  The charismatic Tecumseh and his many Native American followers were allies to the British.  When Tecumseh was killed, the Native American contingent collapsed, and without the tribal forces, the British lost the Battle of the Thames, a turning point in the War of 1812, America's second fight for independence.  According to historians, Captain Gooding never bragged about killing Tecumseh; the soldiers under his command, who witnessed the event, gave him the credit, even while others of the time claimed the honor.  Another historian and author, James Alexander Thom, in his epic Panther in the Sky-- the story of the War of 1812 and the participants from all factions --also gives Captain Gooding the credit for killing Tecumseh and thus turning the tide of battle and the war.   Captain David Gooding, modest American hero and the second individual listed below, was born September 4, 1777, and died May 17, 1853, (according to the latest research).

How did Captain Gooding get buried in Madison County, Indiana?  The Goodings were from Kentucky where the captain's son Asa was born.  In 1827, Asa and others of the large Gooding family moved to Rush County, Indiana, and from there to Hancock and Madison counties. Evidently, Captain Gooding migrated with the family and settled with those members who came to section 9 in Lafayette Township.

The Gooding Cemetery is a family graveyard without any original markers.  The Gooding family owned the land when the plot was first used for burials; therefore, it was called the Gooding Cemetery.  In the late 19th century, Salem School, or school house #2, was nearby at the nearest crossroads, and so in that time period, the cemetery's name gradually changed to the Salem School Cemetery and eventually to the Salem Cemetery.  In the 20th century, the property was owned by Hutchison Orchards, which planted apple trees around the well-known burial ground. Near the turn of the 21st century, Hutchison Orchards was purchased by a housing contractor who, wisely, contacted the Madison County Cemetery Commission and requested that the cemetery be marked so that construction would not intrude upon it.  A gray chain-link fence with gate now designates the perimeter of this small, but very important, burial ground.

It should be noted that the other five individuals on the list below are also recorded as veterans by the American Legion.  Henry Mackelfresh was a veteran of the Civil War.  The service records of the other four have been lost; it is assumed that they also served in that conflict.  The exact number of burials in this small graveyard is also unknown since no formal records ever existed and no original grave markers could be found.  The list that is presented here is taken from the American Legion's records, named above, which were compiled in the 1930s. The Legion's earlier work has helped the present generation not only honor these veterans but also remember the names of at least some of the families buried here who contributed to the country and the growth of Madison County.