Captain Litchfield is listed in the DAR Index of Revolutionary Patriots.  His grave is recorded as unmarked in the Otterbein Cemetery area by the American Legion's Cemetery Record of Deceased Veterans.  The grave's location may actually be in the adjacent Potters' Field.   An American flag is usually placed near Henry Russell's marker to acknowledge Capt. Litchfield's contribution.  Very little information can found concerning his life in Madison County.  He was an early settler in Union Township and may have come to Chesterfield alone. 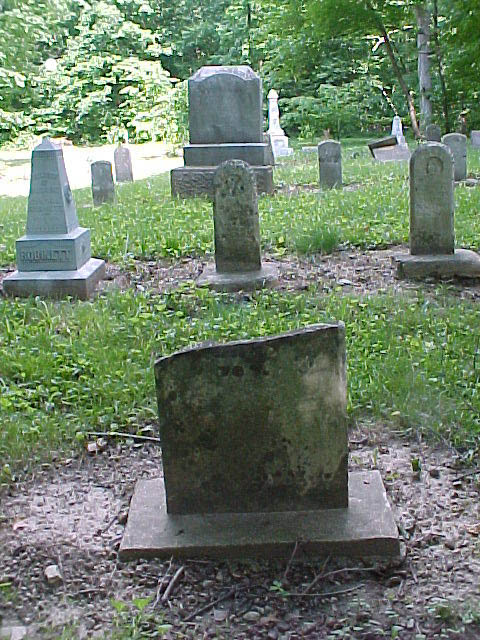 According to Madison County historian Raymond Davis and American Legion records, Clemuel Robinette, Sr., veteran of the Revolutionary War, is buried in unmarked grave 4, row 3, lot 2.  While Clemuel's military record is attested by the Daughters of the American Revolution, the Robinette family does not verify that he is buried in this cemetery.

Reuben Miller, another Revolutionary War veteran, is, however, buried here in a marked grave.  Reuben was born in 1765, and his military service is recorded in the DAR Patriot Index.  He was one of the pioneers to Jackson Township with his wife Jane and son Reuben, Jr.  Members of Reuben Miller's family are recorded on Jackson Township transfer records. Reuben died in 1836 at seventy years of age.  His broken stone is in the southwest corner of the Robinette Cemetery.  In the picture at right,  Reuben Miller's stone is in the foreground; old Robinette stones and markers are in the background.

Andrew Jackson, was buried on his farm.  The exact location of the family graveyard has not been discovered, but the general area is south of CR 1000S on a hill bordering Lick Creek.  His wife Elizabeth is buried with him.  They once had grave markers that have since disappeared.  Andrew Jackson was born in 1742 in North Carolina.  His military service is recorded in the DAR Index of Revolutionary Patriots for that state.  After the war, he eventually located in Wayne County, Indiana.  He moved from there and in 1827 purchased the northeast quarter of section 3 in Fall Creek Township.  His recorded children were Steven, Henry, Lucinda, Dempsey, William, Mary, Andrew, Levi, Elizabeth, Phebe, and Whitlock.  Andrew Jackson was honored, probably posthumously, when his biography appeared in the June 23, 1849, edition of the Pendleton News. 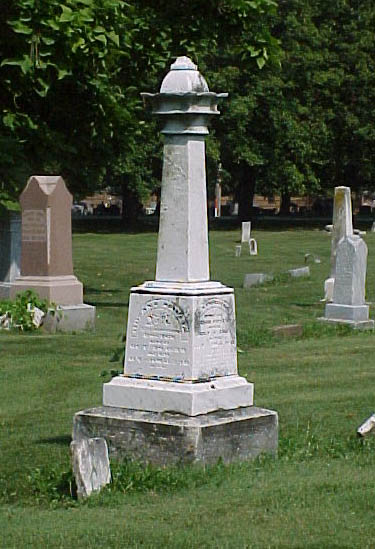 Elijah Boston, brother of Jesse Boston, is recorded as owning land in section 9 of Fall Creek Township.  He was born in Maryland and was successful in the mercantile business there.  At the beginning of the Revolutionary War, Elijah enlisted and eventually became an officer in his Maryland militia regiment.  His service is recorded in Margaret Waters' DAR Supplement.  Elijah Boston does not have a legible marker at Grovelawn, and it is assumed that he is buried in or near the family plot which is marked by Jesse’s pretty Victorian pillar, right.

Philip Hobaugh was born in 1763 and enlisted in the Pennsylvania Militia for service in the Revolution.  He fought at Guilford and Eutaw Springs and was mustered out at Fort Pitt in Novem 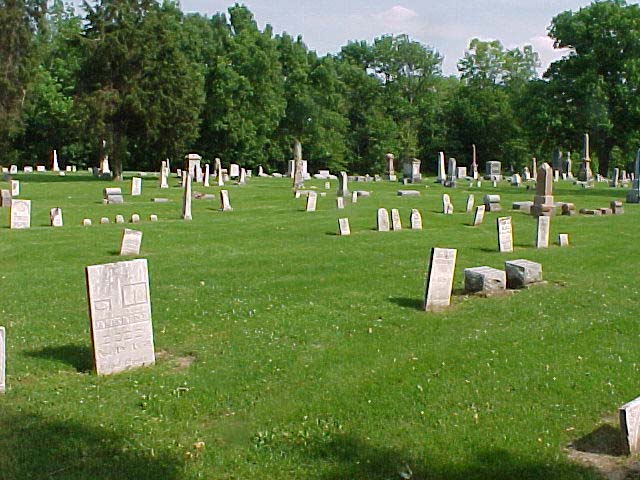 ber 1783.  He is listed in the DAR records.  By 1804, he and his wife Christine Huveum and children Molly, Michael, Elizabeth, Susannah, and Peter were living in Ohio.  The Hobaughs were among the early settlers to Fall Creek Township.  Philip served on a jury in 1825, and the family is listed on the 1830 census.  Philip Hobaugh died in August 1836.

William Wall was born in 1758 in Virginia and served in Taylor's Virginia Regiment.  William's military service is documented in the DAR Index of Patriots.  William's wife was Nancy Elkins and their two known children were John and Martha Ellen.  John Wall would later own real estate in the Pendleton area, and a stone pillar marks the family plot at Old Falls Cemetery.  Both Philip Hobaugh and William Wall are thought to be buried in or near their respective family's plot in the oldest section of Grovelawn pictured left.

Nathaniel Richmond is the patriarch of a family with several descendents of that name.  Nathaniel has a DAR commemorative plaque and stone, placed by descendents, under the flag in the military section in the west half of Grovelawn.  Nathaniel was born in Middleborough, Massachusetts, in July of 1763.  He was a member of that state's 2nd Regiment and saw action at the battles of Valentine Hill and White Plains.  His discharge was signed by George Washington, and he is listed in the DAR Index of Patriots.  Nathaniel married Susannah Lombard in 1783.  When Indiana first opened for settlement, he and his family moved in.  He is first recorded in Dearborn County in 1818 and then in Fayette County in 1821.  Sometime in the early 1820s, Nathaniel found his way to Pendleton and decided to stay there with his family.  Several of his children are listed in the records of Fall Creek Township.  Nathaniel died in September of 1829; his widow was still a resident a decade later.

The information above is taken from "Memorial to Patriots of the American Revolution Resting in Madison County," by local historian Raymond Davis, as presented in Biographical History of Madison County, Indiana, compiled by Helen M. Baumer; Hawkins H. H., editor; n.p. Anderson, 1978.