On the 1876 plat map for Jackson Township, the Neese Cemetery is shown on the south bank of Pipe Creek 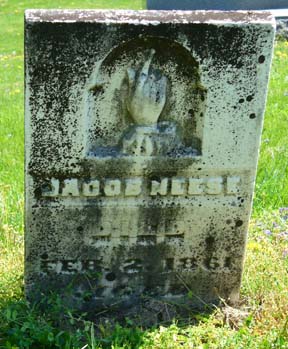 on land owned by R. Neese just south of schoolhouse #3.  The cemetery is one that started as a private plot on a remote hill and developed into a community burial ground named for the family that donated the land, the Neeses.  It is a pioneer cemetery that, in fact, is still being used.  Many generations of the Neese family are represented here.  Patriarch Jacob Neese, who is listed as one of the first settlers to Jackson Township, was born around 1805 and died February 2, 1861, at "56y."  His wife Sarah Moore predeceased him; she was born around 1812 and died in 1852 at "40y."  Reuben Neese, 1847-1916, one of their sons, is featured in Samuel Harden's The Pioneer.  Reuben married Clara in 1866, lived in Perkinsville, and was its postmaster and the owner of the general store started by Thomas Beckwith.  Reuben and relative Solomon Neese are also listed by Harden as attendees to the popular "old settlers' meetings" held in the last decades of the 19th century in Perkinsville.

Related by marriage are the Hoovers.  According to Kathleen Schwartzman, family genealogist, the head of the Madison County Hoovers, Charles Leason Hoover, was born in March of 1796 in Rowan County, North Carolina, into a Quaker family that can be traced back to the Yadkin River area of Daniel Boone and further into Maryland. The extended Hoover family first moved to the Richmond area in Wayne County, Indiana, in 1806.  This is where Charles grew up and married Lucy Webb.  Charles and Lucy eventually had fourteen children, three of whom died in infancy in Wayne County.  Charles and Lucy moved their family to Madison County and purchased land in Jackson Township on the north bank of Pipe Creek.  During the Civil War, five of Jacob and Lucy's sons--John, James, Mark, Emsley, and Enos--served in the army of the North.  After the war, sons Emsley and Enos are shown as owning Jackson Township land on the 1876 plat map.  Another son Mark Reeves Hoover married Sarah Ann Neese, daughter of Jacob Neese, discussed above.  The father Charles Leason Hoover died January 13, 1861.  His wife Lucy, born in 1797, predeceased him in 1859.

Another pioneer family to Jackson Township are the Gentrys whose homestead is featured on the Jackson Township history page.   The Gentrys settled just east of Perkinsville on the north bank of White River in 1827 along the trail known as North Bank Road.  This trail had been used for ages, long before white settlers came, by Native Americans traveling on foot going from what is now Gentryville, Ohio, to the area  that became Chicago, Illinois.  North Bank Road, now designated as CR 280N, mirrors South Bank Road, now referred to as W. 8th Street.  North Bank Road gave way to South Bank Road in popular use only when pioneers started entering the New Purchase of Indiana using ox-drawn wagons: South Bank Road was flatter.  Among the Gentrys buried at the Neese Cemetery are Samuel, who died October 24, 1865, at "67 years," and Elizabeth, who was born March 31, 1798, and died June 11, 1856.

The two stones immediately above are for the same person John D. Foland, who died in 1856 at fifty years of age.  Later descendants had the metal marker, pictured left, from the turn of the 19th century placed on his grave along with the original stone, pictured right, which now leans against the newer.