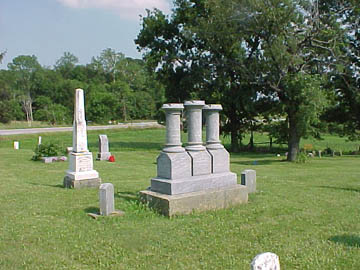 A man who knew the famous frontiersman Daniel Boone is buried here at the Music Cemetery.  According to county historian Samuel Harden, George Moore, 1774-1871, as a boy, spent time with Daniel when the Moore family lived in Kentucky.  George's father was of Daniel's generation and often went hunting with the famous Kentuckian; George would accompany them.

As an adult with his own family, George pioneered the land north of Summitville, arriving in 1836.  He helped organize the township and named it after President Van Buren whom he admired.  George served as the township's first trustee.  Before coming to Indiana, George married Sarah Burk, and they had a son Aquilla who was born in 1819.  In the northern Madison County wilderness, Aquilla met Amanda Robb  who was born August 1821 in Kentucky to parents Robert Robb and and his wife Elizabeth Hillis. Robert Robb also made the journey from Kentucky to Van Buren Township.  He is credited with opening the very first store in the area.  He died in 1855.  His early gravestone is listed below.  Aquilla and Amanda were married on June 27, 1839, and eventually had six children: Columbus, May, George, Mary, Elizabeth, and James.  Aquilla was a merchant in Summitville and served many years as its postmaster.  The Moore-Burk-Robb family stayed on the land they homesteaded, and generations contributed to the area's development.  Thirty members of this family are listed as buried in the Music Cemetery.  George Moore died at ninety-seven years old in April of 1871(the date listed below is inaccurate).  He was one of the longest lived pioneers in all of Madison County.

The Music Cemetery may well be the first burial ground to serve the early settlers in and around Summitville.  With a death date of 1855, Robert Robb's headstone is not the oldest here.  Many earlier than that signify the graves of children, for the death rate among the young was often as high as one out of three.  The earliest legible stones in the Music are incised 1840, one for a son  of Zachariah Robertson  and another for Ellen Stanley who died March 2 of that year.  Later in the same decade, the Stanleys lost several other young members of their family.  The Traders lost two children one year apart, 1848 and '49, and two Steelman siblings died in 1851.  A few early stones for adults are also intact.  Granville Mott was twenty-nine years old when he died on May 9, 1841, and Sarah Musick was seventy-one when she passed away in 1855.  Sarah's circa 1784 birth date would be one of the earliest of those buried here.  On the 1876 plat map for the township, this early pioneer graveyard is indicated on land owned by E. Masic (Music/Musick), undoubtedly a relative of Sarah.

Another township pioneer buried here with an early birth date was involved in politics. Samuel Fenimore, 1799-1874, wanted to be the first justice of the peace for the township.  The 1880 History of Madison County, Indiana relates why he lost:

"The first election was held... November 1, 1837, and Samuel Fenimore and Hiram Palmer were candidates for Justice of the Peace.  Early in the day, Mr. Fenimore mustered his forces, including three voters besides himself, and the four cast their votes for him.  They waited around until nearly night and had begun to congratulate themselves on their success, when, to their surprise and mortification, Mr. Palmer came forward with four voters, and the five all voted one way; by this time the polls must be closed, so Mr. Palmer was declared duly elected first Justice of Van Buren Township."

Poor Samuel was out-maneuvered at the last minute.  It seems that politics and politicians remain the same in any era.  However, Samuel was not without success.  By 1839, there had developed much travel along the Fort Wayne Trace which ran through Summitville.  Samuel built an addition to his cabin and opened an inn to accommodate travelers who might need a "square meal" or night's lodging. His was the first hotel in the township.

It should be pointed out that for the election in 1837, there were only nine adult men voting in the township.  This  indicates the very small number of families living near the Music Cemetery in the early 19th century as compared to the number in the early 21st.  Although not indicated on the burial list below, this pioneer graveyard still occasionally serves the residents of the Summitville area.