Location: south side of Reformatory Road, east of CR 650W

Mt. Carmel Cemetery is connected to one of the earliest churches established in Madison County--the Methodists.  Begun in 1825, the "Mount Carmel M. E. Church" initially held services in congregation members' homes until 1848.  In that year, the Methodists built a house of worship, and in 1862 land for the accompanying cemetery was donated by James Jones, who is buried here at the Mt. Carmel Cemetery.  The body of George Clayton was one of the veterans buried here.  During the Civil War, Clayton was a private in the 2nd Indiana Cavalry and died while he was on furlough at his nearby home.  He was buried with military honors in July 1862.

One of the first pioneer settlers to the southern part of Madison County is also interred at Mt. Carmel.  Saul Shaul died November 7, 1861; he was "95 years, 9 months, and 8 days."  Saul's wife Elizabeth Ward, 1791-1873, is resting here with him according to family historians.  Saul and his family entered one of the first tracts of land as early as 1820 in section 30 of Fall Creek Township; this acreage borders Green Township.   The 1880 History of Madison County, Indiana states that Saul "cleared and improved [the land] by his own hand."    Pictures of the family and the farm with federal style house are on page 111.  Saul's descendents are shown on the 1876 plat maps as owning land in both townships.

Another early family is that of the Whitecottons. George, 1809-1866, wife Angeline Dyson, 1821-1872, and son Sinclair are buried at this location.  Relative Moses was one of the first justices of the peace in the Fall Creek Township community, and he wrote all of his court docket and correspondence in rhyme (!).  (For more on this, go to the Fall Creek Township history page.)

The Alfont family, members of whom lent their name to a hamlet in the southwest corner of the county, are represented here by the children of John Fremont Alfont and wife Martha Ann Welty: Nora E., Ollie, and Ruth A. 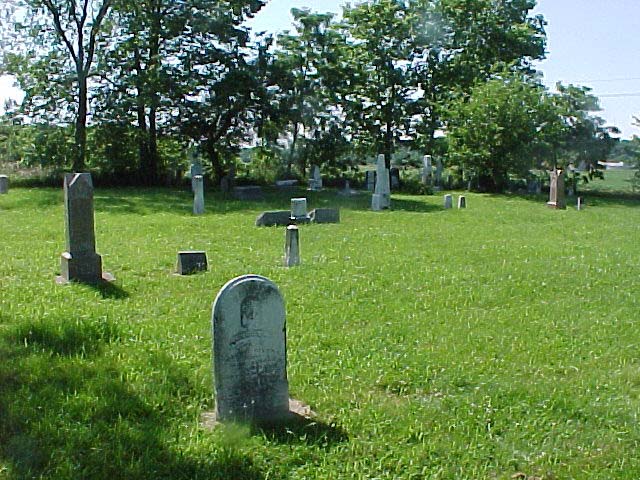 This open, grassy meadow is where a field of stones should be.

Because of neglect in the earlier part of the 20th century, there are very few stones left standing at the Mt. Carmel.  Saul Shaul, discussed above, is now in an unmarked grave.