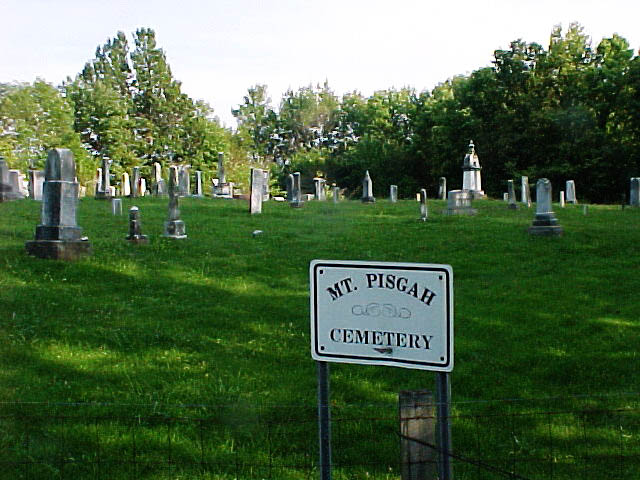 The Mt. Pisgah Cemetery was named for the mountain of this name referred to in the Old Testament.  The burial ground accompanied one of the first Protestant congregations in the township, the Mt. Pisgah Baptist Church.

Living near this church and burial ground were James and Eleanor Hudson who had come to settle in the township in 1835.  James, 1811-1883, was born in Wayne County, Indiana, while his wife, 1813-1895, was born in Kentucky.  They were among the "first families," had eight children, and held religious meetings in their home.  Both James and Eleanor are interred at Mt. Pisgah.  Son Thomas J. married Elizabeth Vinson, daughter of Van Buren Township pioneer Elisha Vinson.  They chose to put down roots and retained the Hudson family farm.  They were "held in high esteem by all their friends" according to Samuel Harden's biographical sketch of the family.

John M. Zedaker, another early settler to the northern sections of Madison County, was born in 1808 in Dayton, Ohio, married Catharine Noland in 1834, and settled west of Summitville in 1841.  "Mr. Zedaker had a hard time as well as other early settlers.  The ground was covered with a dense growth of timber, and covered with water, but they had come to stay, and, with sleeves rolled up, a fight in earnest began," reads Harden's 19th century prose.  John evidently won the "fight," for the Zedakers stayed, had four children--Martha, John W., William, and Daniel M.-- who married and produced the next generation.  John was eventually elected as county commissioner from 1852 through 1856.  Most of the Zedaker family rest here at the Mt. Pisgah.

Another early county commissioner is also here.  Isaac Cox, who was born in 1821 in Decatur County, Indiana, married Mary Smith in Madison County in 1845.  Of Quaker background, the couple eventually had five children, some of which rest at Mt. Pisgah with the father.  Once again, historian Harden provides a glimpse at Isaac's character:

"He was elected and served several years as county commissioner, to the entire satisfaction of all.  He was a devoted Mason and loved its noble teachings, and practiced the same... The township was new when he settled there, and out of the green woods he made a fine farm by hard labor and industry.  He died a little past the noon of life, respected by all."

These three stones are variant styles for husbands and wives. From later in the 19th century, the double pillars with connecting arch, left, were used for a husband and wife buried next to each other.  More Victorian in style, the stones middle and right have traditional symbols.  The Ellsworth marker shows clasped hands.  This represented a husband and wife's companionship in life and meeting in death.  The medallion with tassels has their names and dates.  The Painter memorial, right, is for wife Kezia who preceded her husband in death.  The rose, of course, symbolizes love.

Another politically important first family are the Crees.  John Cree was born in 1794 in Pennsylvania, and he married Elizabeth Smith who was born in 1797 in Virginia.  The couple moved to Ohio first where son Robert was born in 1820.  The Crees eventually had eight children, and by 1839, the family was in the Pipe Creek area.  Besides Robert, there were Ellen, Rhoda, Victorine, Elias, John, and Mark.  John, the father, died in 1868 and Elizabeth in 1888; she was ninety-five.  Both are buried at Mt. Pisgah along with members of their family.  Their son Robert was elected to the state senate in 1875 from Madison and Grant counties combined.  "He served his fellow-citizens with fidelity and ability."  Robert died at age fifty-five and is buried here also.

Although most of the graves in this cemetery are from the last third of the 19th century and the first decades of the 20th, there are some settlers buried here with early birth dates.  Isaac Blose is listed as sixty-four years old when he died in 1830; his must be among the earliest of graves.  The Barretts, Elenore at sixty-nine years when she died in 1870 and Thomas at seventy-two years in 1868, are from the elder Cree's generation.  So too are Sam Harris who died in 1848 at forty-one and Joseph Hall who died in 1869 at sixty-eight.

The Mt. Pisgah Cemetery is a well-kept old settlers' graveyard with most of the original stones intact.  It sits directly on the south side of CR 1300N and so is easily visible to all passersby, many of whom are the descendents of these early politicians' constituency.