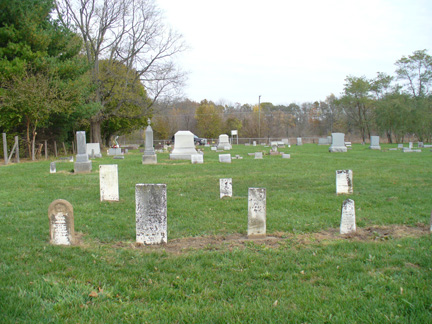 Looking east from the back of the Moonsville Cemetery, this view shows the earliest stones, now reset (2007), with the newer stones closer to the gate, sign, and road.  While the cemetery was begun in the 1840s, the majority of recorded burials at the Moonsville Cemetery are from the 20th century.  Additionally, this settlers' graveyard is still being used in the 21st century by family members and area residents.  The cemetery is located on what used to be called the Moonsville Pike (CR 350E), a short distance south of  its namesake.

While most of the burials at the Moonsville Cemetery are from the 20th and 21st centuries, t 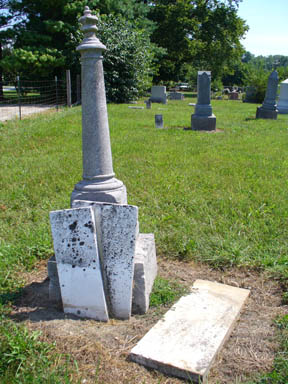 here are a number of recorded graves from the first half of the 19th.  This indicates that this ground was used for interment of the dead almost as soon as the village of Moonsville came into existence, 1839.  According to a description within the archives of the Madison County Historical Society, the cemetery accompanied a church "owned and built by the Society of Friends."  The earliest recorded grave is that of six year old Martha Thornburg who died in 1843.  Following her was another female child, three month old Margaret Fidler who died in 1850.  Other early burials were George E. Fountain who died in 1854 at forty-eight years, Jonathan Pence who died in 1855 at eighteen years, Kasander Thornburg who died in 1857 at thirty-nine years, and Matilda Phillips who died in 1858 at thirty years.

In the fall of 2007, the MCCC, working with the Richland Township Trustee Dick Cleaver, refurbished the old section of the Moonsville Cemetery.  Contractor Larry Brown cleaned the overgrown boundary fence, reset the old stones that had fallen over, and even re-aligned the new ones which needed help.  Most of these pictures were taken after Larry's work was completed.

The Thornburgs, another family of early settlers, is also represented here.  Of the five members who interred at this location, father Jonathan's stone, left, states that when he died in 1865 he was "55 years and 20 days."  At right, the 1857 stone of Kasander Thornburg, although difficult to read, is still intact and standing at the original grave site.  Jasper's stone is center; he died August 9, 1862, at eleven years old.

The Moonsville Cemetery safeguards its share of veterans.  The shield on the stones, left and right, denotes a Civil War veteran.  John Stout Handy, right, is listed in the Cemetery Record of Deceased Veterans.  As his stone testifies, John served during the Civil War in Indiana's Cavalry, 2nd Regiment, Company H, and lived to be almost eighty-nine years old.  At left, serving in Co. 1 8th Ohio Cavalry, Fountain Plummer's name was obviously derived from the marital union between two members of the Fountain and the Plummer families.