Location: north side of West 8th Street Road, between CRs 650W and 800W

The Cunningham Cemetery is a good example of a private family graveyard of the pioneer days.  It sits on a 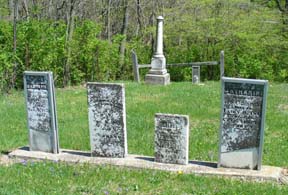 knoll located several hundred yards back from the north side of what the settlers referred to as "South Bank Road" (West 8th Street), the most heavily traveled route into the central and western regions of the New Purchase.  Land on either side of this trail was some of the first to be purchased by settlers moving west.  Thus, in 1822, George Cunningham, 1797-1864, and wife Catherine, 1799-1861, bought from the Brookville Land Office acreage between South Bank Road and White River to its north.  Migrating with George were his parents John, 1768-1851, and Nancy, 1768-1851, both of whom would have been in their fifties when they moved with the family from their farm in Wayne County, Indiana.  Their graves of the 1850s, while early, were not the first.

According to a Cunningham descendent, this graveyard remained a family plot without any exceptions; therefore, the Ashbys were related somehow. The 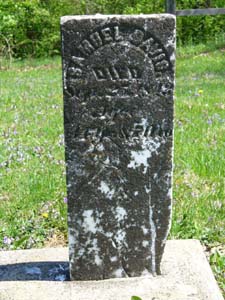 Ashbys arrived around 1826 from Ross County, Ohio, and settled near the Cunninghams.  The Ashby family has several members interred here including Margaret, daughter of Jeremiah and Ann, who died October 2, 1841, just three days old.  Hers is the earliest grave on record for this cemetery and may well be the reason for the graveyard's creation.  Another youth, Samuel Davis, died when only fourteen in 1843.  Another source on the family stipulated that the Coys were also related.  An "M. Coy" is shown on the 1876 plat map for Jackson Township as owning the land containing the cemetery; the cemetery is indicated with a little cross. A Mathew Coy is shown on the 1901 plat map as owning the same acreage; however, at this point the cemetery is not indicated, meaning that in 1901 the cemetery was no longer being used.

In May of 1985, Madison County historian Haroldyne Zook with Patricia Hahn made a transcription of the gravestones.  They found only one stone standing with the others broken and lying on the ground.  The cemetery at that time was part of a cow pasture which explains the destruction.  Zook and Hahn's records were published in the Madison County Historical Gazette, October 1985.  MCCC secretary Georgia Lyons did the final research in 1986, and later the Cunningham Cemetery was reclaimed.

Secluded, containing only members of related pioneering families, in danger of being completely destroyed, the Cunningham is one of the commission's reclamation success stories.