Location: east side of Harrison Street, between Monroe and Jackson streets in Alexandria 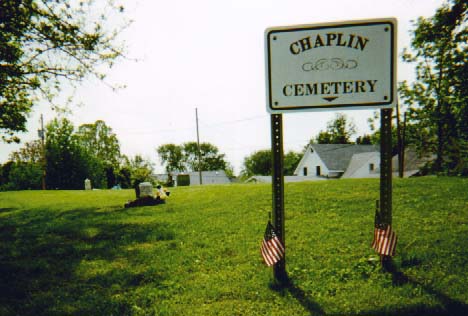 Behind the two and three story homes of an early 20th century housing development in Alexandria is the town's highest knoll and on it hides the Chaplin Cemetery, one of Alexandria's earliest burial grounds.  If one is traveling south on Harrison, he/she may glimpse the sign and the cemetery's location.  Otherwise, if traveling in any other direction on the surrounding road 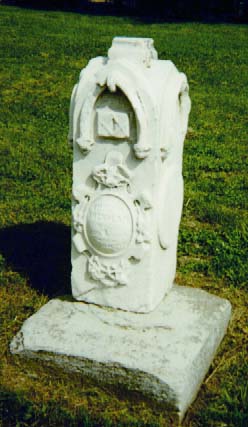 s, the cemetery remains hidden.  Only the immediate neighborhood is aware of the cemetery's presence.

Also included, according to Monroe Township historian Nancy Draper, is John Marsh, who was one of the first settlers to the area and a veteran of the War of 1812.

An important early developer of Alexandria is interred in an unmarked grave at this location.  David Pickard, who died at age fifty-two, was instrumental in making Alexandria a livable community.  He was originally from Maine and arrived near Alexandria around 1834. He was the first postmaster of the town and was elected in 1836 as the first justice of the peace in the township. Pickard opened the first hotel in 1838 on the corner of Harrison and Berry streets, and he built the first schoolhouse on lot 5, block 8 in 1839. How appropriate that Mr. Pickard is surrounded by residents of the town he helped develop.

There are not many stones left in this cemetery, especially when compared to the number of names in the list below.  Most of the stones that do remain are from the mid to late 1800s while some of the earliest burials listed were in the 1840s.  Undoubtedly, judging from the proximity of this graveyard to the Alexandria settlement, there were burials at this location even earlier. The last burial here was in the 1940s.

The Chaplin is shown on the 1876 Monroe Township plat map as being near the railroad and on the forty acres of farm land owned by J. Chaplin for whom the burial ground is named.

The Perry family, mentioned above, does have a few stones existing at the Chaplin.  Perry members are listed by historian Samuel Harden as early settlers to Monroe Township.  At left is what remains of Allen Perry's broken marker.  Allen died "June 29, 1860 aged 70 years."  He would, therefore, have been born in the 18th century. Miriah "wife of A. Perry died Oct. 10, 1881 aged 55 years."  Mariah, most likely, was married to a Perry male of the generation following Allen's.   At right John Perry, "1810-1863 Com. 101 Ind. Vol." must have died in the Civil War.  His larger, substantial block as weathered time and circumstances pretty well.