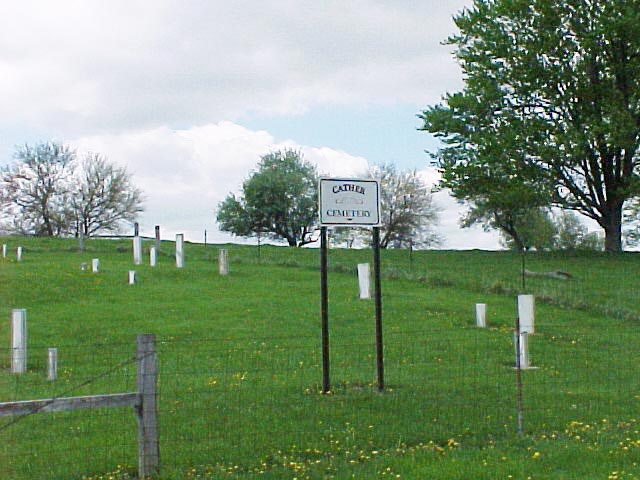 The Cather family, for whom this cemetery is named, has some interesting historical and literary connections.  Robert Cather, Sr., 1787-1843, was the Hoosier settler from this Virginia family.  According to the history Frederick County, Virginia by Wilmer Kerns, Robert's father was Jasper Cather, 1740-1812, who descended from the clans located in the highlands of Scotland.  The name "Cather" may stem from the Scottish "Cawdor," near Inverness, famous in literature as the setting for Shakespeare's Macbeth.  Jasper immigrated to America via Ulster in Northern Ireland around 1760.  Jasper owned a series of farms in the Virginia and Pennsylvania frontiers and was also a teacher.  Jasper fought as a private in the Virginia militia during the Revolutionary War and supposedly witnessed the British surrender at Yorktown.

Jasper had ten children including Robert.  From the Kerns history:

"Robert was a teamster and was proud of his horses and Winchester wagons. The Winchester wagon had more finish and style than the Pennsylvania wagon, the bed-rails more curving, and the end-gates more sloping.  Robert hauled grain and goods between several markets, including Winchester, Alexandria, Baltimore, and the upper Shenandoah Valley below Natural Bridge.  Robert and his family migrated from Frederick County in 1823 for Brownsville, Pennsylvania, where the Old National Road [US 40] crossed the Monongahela River.  In 1826, they moved to a farm in Clinton County, Ohio.  Later, about 1837-1838, they resettled on a farm four miles west of Anderson, Indiana where they died."

Robert had married Rosannah Johnston on April 7, 1813, in Virginia.  Rosannah was born on February 12, 1788.  She was the cousin of Confederate General, Joseph E. Johnston.  She is the Rosannah listed below who died July 5, 1857.  The farm mentioned above is the land along 8th Street which contains the Cather Cemetery.

Robert and Rosannah had seven children, and they probably met the Myers family while they lived in Clinton County, Ohio.  Their daughter Rebecca, born in 1816 in Virginia, married Samuel Myers in 1835 in Ohio.  Samuel would eventually become a prominent citizen and public servant in the Anderson, Madison County area.  When the Cather/Myers families moved to Madison County, Samuel and wife Rebecca bought 220 acres next to Robert and Rosannah's 600 acres west of Anderson.  Rebecca and Samuel's son Jasper, born 1838, attended West Point and was in the same class as George Armstrong Custer.  Rebecca died on May 10, 1839, when Jasper was just five months old.

Her sister Elizabeth, 1822-1895, married the brother-in-law Samuel, and Samuel and Elizabeth had nine children.  Their daughter Mary Rosannah Myers, born in 1842, married an Adamson.  Mary Myers Adamson's daughter Maggie Adamson married Moses Sanford Tousey, 1854-1906.  Tousey became a noted author of children's stories including White Prince, the Arabian Stallion and many others.  Another daughter of Elizabeth and Samuel Myers was Carrie, born in 1844.  Carrie married Hiram Vandevender who died of wounds received at the siege of Vicksburg during the Civil War.

A third daughter of Elizabeth and Samuel Myers, Kate, born 1856, was, according to a family story, a sweetheart of Hoosier poet James Whitcomb Riley.  The Myers family were connected with the Anderson newspaper, and  Kate may have met Riley when he was working for the Anderson Democrat in 1870s.  When Kate refused to continue the relationship with Riley, Riley wrote her a letter which a family genealogist still retains.  Kate was killed in a horse and buggy accident some years later, and supposedly Riley attended the visitation and pressed a poem into Kate's hand resting in the open coffin.

Robert and Rosannah's son William Robert, or Robert W. as he later preferred, was born in 1823 and died in 1906.  William Robert was married twice and had several children.  He continued operating "the Cather Farm" west of Anderson.

Another daughter Sarah Ann was born in 1827 and married John Morris.  Sarah and her son Charles are buried at the Cather and do have gravestones.

Robert and Rosannah's other three children were all lost to them in 1837. Shortly after arriving in Madison County, their son Jasper drowned in White River on June 4, 1837, while attempting to help a fisherman.  He may very well have been the first interred at and the reason for starting this family graveyard.  Jasper's 1837 style gravestone was discovered with others and reset when the cemetery was restored in 1997.  His stone lists him as "19Y 7M 1D" old.  Daughter Serepta, born 1827 and son George, born 1829, died of a "high fever"  a day apart, August 13th and August 12th respectively. These two are probably buried at the Cather Cemetery in unmarked graves.  The three 1837 deaths coupled with Rebecca's death in 1839 would have meant that Robert, Sr., and Rosannah endured the loss of four of their children within a two year span of time.

An additional literary tie to the Cather family is through James Cather, a brother to Robert, Sr.  A branch of James's family settled in Nebraska, and a descendent of James Cather was Willa Cather, a Pulitzer Prize winning novelist in the early 20th century.  Willa was the author of O, Pioneers and My Antonia among others.

Beyond the names listed below, the Cather Cemetery was the original burial site for Samuel Myers, his two wives, Rebecca and Elizabeth Cather, and daughters Kate Myers Kingsley, and Carrie Myers Vandevender.  In 1922, their bodies were removed to the large Myers section in West Maplewood.  Family descendent and genealogist, Diane Schaaf, believing that the original family cemetery had been completely destroyed, erected memorial stones for Robert, Sr., and Rosannah in the Myers section of West Maplewood in the late 20th century.  Robert Cather, Sr., is believed to be buried in an unmarked grave near his wife Rosannah on the cemetery hill overlooking the pioneers' trace now known as 8th Street.