This cemetery is named after Isaac Bucco/Bocco, 1799-1884, who owned the land and donated a half acre as a cemetery for family members and neighboring farmers.  Bucco, Hoppes, Stanley, Stinson, and Clem--names that are listed below--can be found on the 1876 plat map in the southeast sections of Anderson Township surrounding the little cross that represents this cemetery.

This cemetery in modern times was being encroached upon by an interstate highway and business developments.  The Bucco was in shambles by mid twentieth century and was actually listed as destroyed at one point.  In 1985, the Kik-tha-we-nund Chapter of the Daughters of the American Revolution recorded all legible data from existing markers.  Past-regents Jane Ritter and Irma Wells and present regent Judy Gulmire were responsible for this arduous task.  In 1988, the township trustee and board, named on the cemetery stone pictured below, completed the restoration of this cemetery.  It is now safely fenced, marked, and well-kept.  This reclaimed pioneer burial ground, in fact, is still being used for family descendants.

Located on a small hill complete with magnificent, aged trees and perennial peonies, the cemetery is between the MagnaQuench building and Ryan's Steak House just south of I-69. Thus, the Bucco, once forgotten and in danger of obliteration and now surrounded by modern businesses, has become an excellent example of how the past can beautify the present. 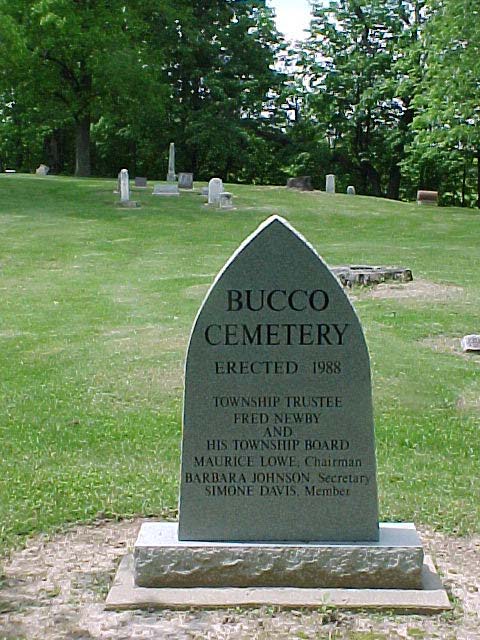 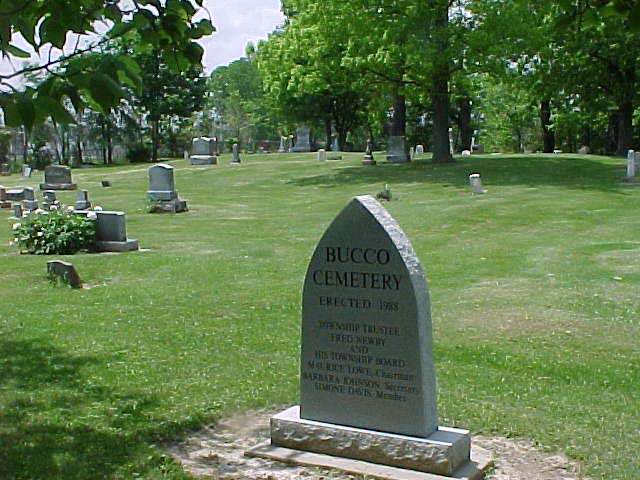