Archives at the Madison County Historical Society provided the back-story on the disappearance of this family burial ground.  Two small clippings from periodicals contained information from readers.  Under the title "More Mutilated Cemeteries" from an unidentified 1970 newspaper:

Q.  'I need information on the Rogers-Richwine Cemetery in Jackson Twp...  According to a deed I found, it appears that the cemetery plot was "donated" by the owner [to the 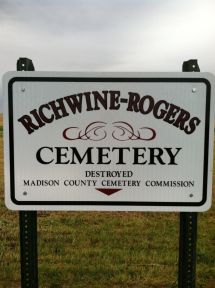 county], and not sold with the rest of his land.  During the late 1940s or early 1950s, a county work crew is said to have picked up the stones in the cemetery and piled them as rubble while building a small bridge across a nearby farm creek.  While exploring the grounds, we were able to find two headstones (dated 1844 and 1860) and four footstones.  I suppose numerous other stones are buried in the creek under rock and debris.  (Among persons buried there, our ancestor is probably included: Cuth?/Cuthbert [?] Webb, who died about 1846...)  What can we do to help restore what was said to be a well-populated graveyard?

A.  'Unfortunately, you are probably fighting a losing battle on this.  The law requires maintenance of cemeteries, but maintenance, we are sorry to say, often includes mowing machines knocking down stones, one by one.  Some well-mowed old cemeteries now contain but a few standing stones from many that stood some years back among the weeds.  [Loose] stones are often neatly stacked at the rear of such a cemetery until someone needed some stepping stones.'

From the 1968 "Madison County Historical Bulletin":

'On Memorial Day I rode down three miles south of Frankton.  The old cemetery was located about on half mile east of the Boy Scout camp, or a half mile east of the old Bell Rattle School on the north side of the road [CR 500N].  This graveyard has entirely disappeared.  Surely someone is guilty of desecration, for over 40 years ago there were many tombstones.  Now it is farmed.  Seems it was called the Rogers Cemetery.'

It should be remembered that not until 1973 did Indiana have laws protecting pioneer burial grounds from destruction by farmers wanting to expand fields for planting or from encroachment by private, business, or government concerns.

The following notes were made by former MCCC Secretary Georgia Lyons:

"...stones were found and copied 22 June 1968 by Donald L. Wilson, with the help of his brothers, Tim and Jim Wilson.

"2. M. C. footstone; found on a pile of rocks just outside the fence; speculate it may refer to someone of the Cannon family.  Moses Cannon was living in the Jackson Twp. in 1850.  Moses Sr.'s wife was named Martha, aged 50, and he had an unmarried dau. name Meriah, aged 17.  Moses Jr.'s wife was named Mary...

"...stones were found 2 April 1969 among the rubble behind the dam on the farm's creek, not far north of the graveyard.

"6. S.E.S. footstone, same initials as 4.; this stone is slightly smaller.

"In addition it is speculated that the following persons may be buried here (no stones found):

In June of 2010, Steve Hudson, the present owner of the farm ground in which the Rogers-Richwine Cemetery once  existed, contacted MCCC Secretary Melody Hull and asked help in locating and marking this family burial ground.  MCCC volunteers met with Mr. Hudson on June 10th about a half mile west of CR 600W between the drainage ditch and CR 500N, the general area designated by early 20th century township maps as the location of the Rogers-Richwine.  Commission members thanked Steve for the opportunity to determine the cemetery's exact location and began probing the earth.  Small cavities were found indicating possible grave plots; however, a specific cemetery site could not be determined.  Mr. Hudson and commission members agreed that years of farming and later grading of the earth south of the ditch had completely obliterated any remnants of this pioneer graveyard.  Commission members then explained to Mr. Hudson that a memorial sign reading "Roger-Richwine Cemetery, Destroyed" could be placed by the road in line with the cemetery's approximate location.  Those present choose the most likely spot for the graveyard based on memories Mr. Hudson recalled from growing up on the property, the cavity positions, and township maps: a small knoll with a nearby ancient cottonwood tree.