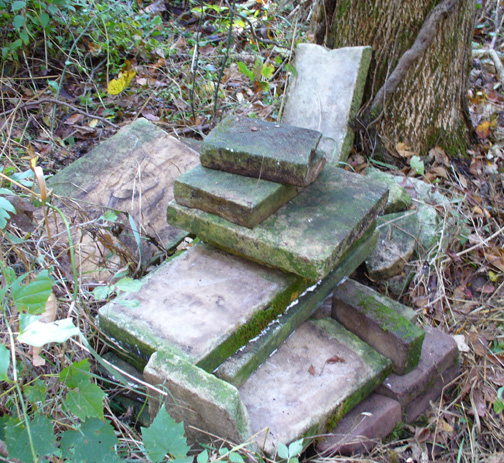 Occasionally, the Madison County Cemetery Commission receives information from a descendant of early settlers that alerts us to reevaluate a situation.  For decades the Anderson Cemetery was recorded as destroyed, but recently (2010) Anderson family genealogist Mary Reece sent via email pictures of gravestones and notice that her mother had located the possible original site of the burial ground in the 1990s and that her grandmother had additional notes from the 1970s on this cemetery and the people resting there.  MCCC members were put on alert, information was gathered, phone calls were made, and a field trip to the beautiful farm land in Green Township was organized.

Like many other family graveyards from the early 19th century, this one was originally located in a secluded section of the property, away from buildings, work, and life, on a high point of ground near a water way.  The farm's woodland, where the cemetery was once outlined, was pastured for cows in mid 20th century.  However, the wood's heavy, tall underbrush and small trees had since taken over the knolls boarding Foster's Creek.  Indeed, this may be the reason that the first Cemetery Conditions Committee of the Madison County Historical Society labeled in the 1960s the cemetery as "destroyed."  According Ms. Reece's family notes, the stones had been broken and strewn on the ground by the pastured animals and so the location of the graves could not be determined.

The recent field trip in search of the Anderson Cemetery's gravestones was, however, highly successful.  Farm manager Randy Perkins went out of his way to locate the markers in the woods' heavy brambles and undergrowth.  According to Mr. Perkins, someone, a private historian perhaps, at some point had gathered and stacked the stones face down against a tree.  After several trial and error searches, Randy found the gravestones, and volunteers were then able to read and photograph the eight legible markers. GPS readings for the cemetery's probable location were even recorded.  The forked ash, against which the stones were placed, is on the perimeter of a clearing about twenty feet in diameter, the size of a small graveyard.  The clearing has no significant mature growth trees--the most likely spot in this overgrown woods for the original location of the Anderson Cemetery.

Genealogist Mary Reece descends from the first person recorded on the burial list below, "Anderson, Mary, [born] May 1822, [died] Nov. 7, 1856."   While Mary Anderson no longer has a gravestone, Ms. Reece informs the commission that her ancestor's stone was still there in 1969 when Ms. Reece's grandmother recorded the marker.  Mary Anderson is Mary Reece's great-great grandmother.  Mary Anderson's maiden name was Tucker, and she was born in Virginia in 1822.  She married George R. Anderson in that state May 13, 1839.  The couple was from the Botetourt County area near Fincastle and came in 1851 to Madison County, Indiana.  George and his first wife Mary had seven children: Nicholas Shirkey, 1842-1925; George Ross, 1844-1925; Mary Ann, 1847-1911; Narcie E., born 1849; Thomas P., born 1850; George Wade, born 1854; and William Albert, 1856-1914.*  The fact that Mary Tucker Anderson's last child was born in 1856, the year of her death, may indicate that she succumbed from complication during childbirth.  Whatever the cause of death in that era, the husband would have used the services of the cemetery on the property to bury his wife and mother of his children.  Twenty years later, "George R. Anderson" is shown on the 1876 plat map for Green Township as still owning the land on which the Anderson Cemetery is located.

While Mary Tucker Anderson has no stone, there are markers here for the members of two earlier families, the Cooks and Dobsons.

The pictures for the first two stones above were supplied by Ms. Reece.  Those markers were again found among the others during the field trip.  The gravestones with the chalk or shaving cream applied for legibility, above and below, were photographed by MCCC volunteers.  The chalk and shaving cream do no damage and wash off in the next rain.

The Dobson family, represented below in pictures of gravestones, was headed by Samuel Dobson.  He, along with relative Adam Dobson, is recorded by county historian Samuel Harden in The Pioneers as one of the first land owners in Fall Creek Township.  Fall Creek Township is on Green Township's east border.  When Samuel and his family moved from Fall Creek to Green is not known, but movement west was a life style for many in the 19th century.  Land was continually being acquired from the Native Americans by the government, and large western territories were being opened for settlement throughout the era.  The Samuel Dobson family eventually moved on into Allamakee County, Iowa, where he and his wife Rebecca Grigsby are buried.  Samuel, a son of George Dobson, was born November 6, 1804, and he died December 16, 1861.  Wife Rebecca was born March 1809 in Harrison County, Virginia; she died February 8, 1879.   They had eleven children: Mary Anderson Dobson, born 1827; George, 1829-1855; Adam, died 1831/51; Palmer P., 1832-1897; Saul, 1835-1862; Manly, 1838-1840; Amanda Elizabeth, 1840-1865; Jane Shanklin, born 1842; Catherine Ann, born 1847; Taca, born 1850; Emily, born 1852.**  Of the eleven Dobson sons and daughters, at least two, Manley and Adam, remained in Green Township, Indiana--buried at the Anderson Cemetery.

The above stone for Manley Dobson who died in 1840 is the earliest one discovered.  Manley's death may be the reason that this private family graveyard was started.  Once a family had begun a burial area, it was opened, out of tradition and consideration, for use by other neighboring settlers.

As an added complication to cemetery records, during the initial investigation in the 1960s by the Cemetery Conditions Committee of MCHS, the burials in the Anderson Cemetery were assigned incorrectly to the Smithers, also in Green Township.  However, upon reading the stones found at the Anderson's general location, the MCCC was able to correct the Smithers' burial list and develop a separate list for the Anderson, below left.

The Madison County Cemetery Commission always appreciates the information provided by family genealogists like Mary Reece.  Family records and history like this add so much depth to the mere places and dates of commission archives.

**Genealogical data on the Dobson family supplied by Mary Reece.